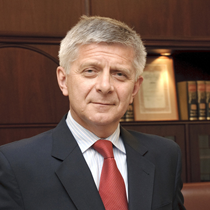 Born in January 1952 in Łódź, Marek Belka graduated from the University of Łódź with a Master’s degree in economics in 1972 and continued his academic career at the Institute of Economics at his alma mater. He received his Ph. D. in 1978, which was followed by a postdoctoral degree in economics (“habilitation”) in 1986. Associated with the Institute of Economics of the Polish Academy of Sciences since 1986, Marek Belka was a research fellow at the Columbia and Chicago Universities (1978-79,1985-86), as well as at the London School of Economics (1990). He received the title of Professor of Economics in 1994. Professor Belka has published over 100 scientific papers devoted primarily to the theory of money and anti-inflation policy in developing countries. He specializes in applied economics and contemporary economic thought.

From 1994 to 1996, Professor Belka was Vice-Chairman of the Council of Socio-Economic Strategy at the Council of Ministers, and then, economic adviser to the President of the Republic of Poland. Professor Belka served twice as Deputy Prime Minister, Minister of Finance: in the government of Włodzimierz Cimoszewicz in 1997 and in the government of Leszek Miller from 2001 to 2002.

From May 2004 to October 2005, Professor Belka served as Prime Minister of Poland. Professor Belka has also held numerous high-ranking positions within the international community. In 2003, he served as Chairman of the Council for International Coordination for Iraq and as Director of Economic Policy in the Coalition Provisional Authority (2003-2004), where he was responsible for the currency reform, the development of a new banking system and the supervision of the Iraqi economy.

From 2006 to 2008, he held office in the United Nations as Executive Secretary of Economic Commission for Europe (UNECE) in Geneva. In November 2008, he assumed office as Director of the European Department at the International Monetary Fund. On 10 June 2010, Professor Marek Belka was approved by the Parliament of the Republic of Poland as President of Narodowy Bank Polski.

From November 2011 to October 2015, Governor Belka chaired the World Bank/IMF Development Committee. In January 2011, he was elected a Member of the Steering Committee of the European Systemic Risk Board. Since June 2012, he has chaired the Vienna 2.0 Initiative Steering Committee. In May 2013, Professor Belka became a Member of the Central Bank Governance Group at the Bank for International Settlements (BIS) in Basel.

Professor Belka is married and has two adult children.