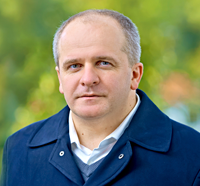 Professor Paweł Kowal is a senior research fellow at the Chair of European History and Civilization at College of Europe (Natolin) where he co-leads, together with Professor Georges Mink, the Three Ukrainian Revolutions project. He is also assistant professor in the Institute of Political Studies at the Polish Academy of Sciences.  In the past he co-founded the Museum of the Warsaw Rising in Warsaw and between 2009 and 2014 served as a member of the European Parliament, Chairman of UE delegation to EU-Ukraine Parliamentary Commission and of Foreign Affairs Committee.

Between 2007 and 2009, Paweł Kowal was a member of the Polish Parliament (Sejm), in 2006-2007 serving as a Secretary of State in the Ministry of Foreign Affairs. He has published numerous publications on the transformation processes in Central Europe and is a member of the editorial board of the bi-monthly New Eastern Europeand member of the board of Platform of European Memory and Conscience and the Board of the Jan Nowak-Jeziorański's College of Eastern Europe (Kolegium Europy Wschodniej) in Wroclaw. He recently published Wojciech Jaruzelski's biography and is preparing an edition of archival documents on Polish view of the fall of the USSR as well as on monograph on the role of the oligarchy in Ukraine.