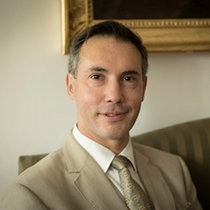 Richard Butterwick (from 2012 Butterwick-Pawlikowski) studied History at the University of Cambridge where he graduated with first-class honours in 1989. Following a year at the Jagiellonian University in Kraków, he moved to the University of Oxford to study for his doctorate, which he was awarded in 1994. He then held a postdoctoral fellowship at Oxford, before becoming Lecturer in Modern European History at the Queen’s University of Belfast in 1997. In 2005 he moved to the School of Slavonic and East European Studies at University College London, where in 2013 he became Professor of Polish-Lithuanian History. He took unpaid leave from UCL in 2014-17, and worked part-time for UCL in 2017-20, enabling him to hold the European Civilization Chair at Natolin in 2014-20. He now divides his time between his Chair at UCL and the Polish History Museum in Warsaw, of which he is the Principal Historian.

Professor Butterwick-Pawlikowski’s research focuses on the Enlightenment and its critics, and on one of the most remarkable polities in European history – the Polish-Lithuanian Commonwealth (1569-1795). In 2016 he was awarded the bronze medal Gloria Artis for his services to Polish culture and gained the degree of habilitated doctor from the Polish Academy of Sciences. He is the author of over eighty scholarly publications – monographs, edited volumes, and articles and chapters in refereed journals and collections. These include: