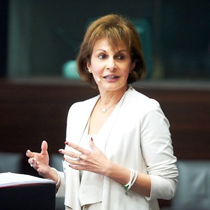 Shada Islam is a Brussels-based commentator on European Union affairs who now works independently as an advisor/analyst/strategist on questions related to Europe Africa Asia Geopolitics Trade and Inclusion.

Ms Islam is a member of the European Policy Centre’s prestigious Strategic Council and Senior Adviser for its Europe in the World programme. She is also Senior Advisor at the Centre for Global Development, a founder member of the EU-Asia Centre and is editor-in-chief of the EUObserver Magazine. She worked for nine years as Director of Europe and Geopolitics at Friends of Europe, an influential independent think tank based in Brussels. She now runs her own Brussels-based global strategy and advisory company, New Horizons Project.

In 2017, Ms Islam was selected as one of the 20 most influential women in Brussels by the magazine Politico. She is also a Solvay Fellow at the Vrije University Brussel (VUB).

Ms Islam has spent most of her professional life researching, writing and speaking about the European Union’s relations with Asia, building up a global reputation as a leading commentator, analyst and writer as well as a fresh and original thought-leader on the EU’s domestic and foreign policy agendas.

She is a regular speaker at international conferences and policy panels and is a frequent lecturer at academic symposia on geopolitics. She is often interviewed by international media and writes regularly on Europe, Africa, Asia and Migration. Her articles appear, among other outlets, in the EUObserver, the Guardian, the East Asia Review, Politico and the South China Morning Post as well as in academic journals. Her Frankly Speaking columns published when she was at Friends of Europe are still widely read.

As a correspondent for over 20 years for Asia’s leading news weekly “The Far Eastern Economic Review”, Ms Islam has acquired an in-depth knowledge and unique insights into the policies and priorities of governments, business and civil society actors in both Asia and Europe. As such, her opinions and advice are much sought-after by Asian and European governments, including the European Union institutions and the European External Action Service as well as business, civil society and academia. She is a regular speaker at international conferences and is a frequent lecturer at academic symposia in both Asia and Europe. She is often interviewed by international media.

Ms Islam set up Friends of Europe’s very successful Asia Programme in 2011, rapidly making it into one of Europe’s most influential knowledge platforms on EU-Asia relations. She has a Masters Degree in Journalism and Social Communication from the Universite Libre de Bruxelles.

She has contributed to many international publications and participated in several conferences and seminars on EU-Asian relations, including:

· Louis Brennan and Philomena Murray (eds.), Drivers of Integration and Regionalism in Europe and Asia”, London and New York, Routledge, 2015.

· The Age of Connectivity – ASEM and Beyond (Konrad Adenauer Stiftung)