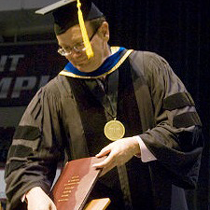 Theodore R. Weeks is Professor of History at Southern Illinois University, Carbondale, where he has taught for over two decades.  He received his BA and MA at the University of Colorado in Boulder, studying German literature, and his Ph.D. from the University of California at Berkeley with a dissertation on nationality policy in late imperial Russia.

Born on the island of Okinawa, Tadeusz (as he is known in Poland) has studied, done research, and worked in a dozen countries including the USSR, Czechoslovakia, Israel, France, Germany, Lithuania, and Japan.  Among his major publications are three books: Nation and State in Late Imperial Russia (1996), From Assimilation to Antisemitism: The “Jewish Question” in Poland, 1850-1914 (2006), and Vilnius between Nations 1795-2000.   He has recently started a new research project on the beginnings of Polskie Radio in the interwar period.

Weeks’s research interests focus on nationality, ethnic relations, urban history, and most recently the nexus between technology and socio-political transformation.  He has taught a wide variety of courses from broad surveys of Western Civilization and World History to specific graduate seminars on imperialism and urban history.  His personal interests include travel and languages.