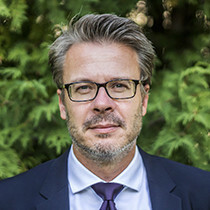 Professor Tobias Schumacher took up the European Neighbourhood Policy Chair at the College of Europe Natolin campus in Warsaw on 1 July 2012. He is also a Visiting Professor at Sciences Po in Rennes and an Associate Senior Research Fellow at the Centre for International Studies (CEI-IUL) at the University Institute of Lisbon.

Prof. Schumacher studied Political Science, Business Administration and Sociology at the Universities of Freiburg, Basel, Edinburgh and Mainz where he obtained his doctorate in Political Science in 2002. He then held a Jean Monnet Fellowship and subsequently a Marie Curie Fellowship at the Robert Schuman Centre for Advanced Studies (RSCAS) at the European University Institute in Florence and was later in charge of the scientific coordination of the RSCAS’ Mediterranean Programme. From 2004 to 2006 he was also an Associate Research Fellow at the German Council on Foreign Relations (DGAP) in Berlin. In 2005 he moved to Lisbon where he worked as Director of Research of the Euro-Mediterranean Study Commission (EuroMeSCo) and as Senior Research Fellow at the Institute for Strategic and International Studies. From 2009 to 2012 he was a Senior Researcher at the Centre for Research and Studies in Sociology (CIES-IUL) and a Professor of International Relations at the University Institute of Lisbon (IUL). In 2013-2014, Tobias Schumacher was a Visiting Professor at Ilia State University in Tbilisi, and in the first half of 2016 he was a John F. Kennedy Memorial Fellow at the Minda de Gunzburg Centre for European Studies at Harvard University.

Prof. Schumacher was awarded several fellowships and grants, among others, by Harvard University, the University of Cambridge, the European Commission, the European University Institute, the Fondazione Monte Paschi dei Siena and the Foundation of the German Economy (sdw). In 2012, his article (co-authored with Prof. Raffaella Del Sarto) entitled 'From Brussels with love: leverage, benchmarking, and the Action Plans with Jordan and Tunisia', published in Democratization, Vol. 18 (4), 2011, pp. 932-955, won the scientific award for academic excellence of the University Institute of Lisbon.

Prof. Schumacher’s research focuses on European Foreign Policy Analysis, with a particular focus on EU foreign, security and trade policies and norms and rules transfer towards Eastern Europe and the South Caucasus and the Middle East and North Africa, as well as on political transition, authoritarianism and peace and conflict in the EU’s (wider) eastern and southern neighbourhoods. He is the author of approx. 100 scholarly publications – monographs, edited volumes, and articles and chapters in refereed journals and collections, and he is a regular contributor to the international media.

Among his most important publications are:

Prof. Tobias Schumacher's list of publications is available also at: