On Friday, 27 January 2023, the President of Ukraine Volodymyr ZELENSKYY delivered live a special online address and answered questions from the students at the College of Europe. President ZELENSKYY stressed the importance of values in the European project:

"I urge you to study here at the College of Europe, not how to be part of the European bureaucracy, not just how to be experts in European affairs. But how to be defenders of European values. How to be leaders in the fight for Europe. How to actually be commanders who can lead others in the battle for Europe." – H.E. Volodymyr ZELENSKYY, President of Ukraine

It was one of the few live meetings that President ZELENSKYY has had so far at universities worldwide. The President of the Republic of Lithuania Gitanas NAUSĖDA addressed the audience with a video message:

"This event brings me hope that the future of Europe is in good hands. Dear students! When you graduate and you go back to your capitals or Brussels, always stand in defense of what is right: freedom and democracy." – H.E. Gitanas NAUSĖDA, President of the Republic of Lithuania

The event was hosted and officially opened by the Vice-Rector, Mrs Ewa OŚNIECKA-TAMECKA, who underlined the immense sacrifice of the Ukrainian nation and its impact on the contemporary shape of Europe:

"Today, the story of Europe has a Ukrainian face. The face of thousands of Ukrainian soldiers and civilians, the face of refugees, the face of children and their mothers." – Mrs Ewa OŚNIECKA-TAMECKA, Vice-Rector of the College of Europe

The Rector of the College of Europe, Mrs Federica MOGHERINI, joined the event online from Bruges and emphasised the unwavering support of the College community for Ukrainians:

The unique occasion was the culmination of a series of events in the framework of the Ukrainian and Lithuanian National Days, organized last week by Natolin students from both countries.

Watch the full recording of the event and the photo gallery below: 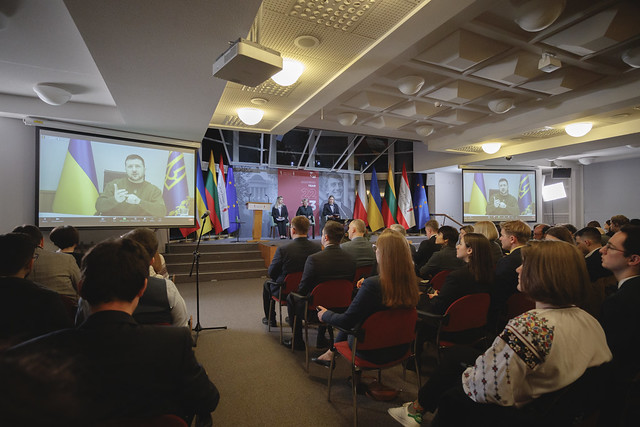