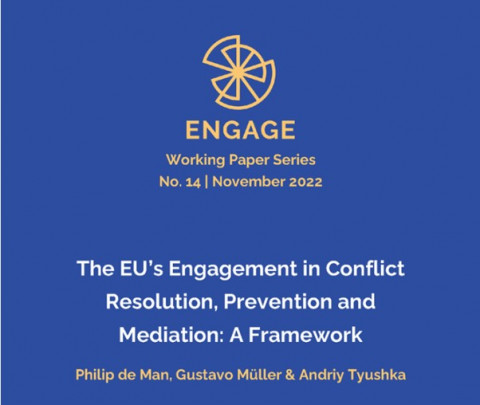 Dr Andriy TYUSHKA, Senior Research Fellow in the European Neighbourhood Policy Chair at the College of Europe in Natolin, has just co-authored (alongside Philip DE MAN and Gustavo MÜLLER from KU Leuven) a Working Paper in the framework of the Horizon 2020 'ENGAGE' project titled 'The EU’s Engagement in Conflict Resolution, Prevention and Mediation: A Framework'.

This working paper advances an analytical framework to study the European Union’s engagement in interconnected areas of conflict prevention, mediation and resolution. In so doing, it first explores the different theoretical understandings of conflict prevention, mediation and resolution, including what could and should pass as a case of ‘successful involvement’ (Philip DE MAN). Secondly, it conceptualizes the EU’s ‘capacity to act’ across the spectrum of conflict and crisis management as both an ability to act collectively and coherently as well as an often-overlooked ability to pursue specific goals of such an engagement (Andriy TYUSHKA). Thirdly, it surveys varied instances of the EU’s engagement in managing nearby and far-away conflicts and crises, with a focus on CSDP missions (Gustavo MÜLLER).

This paper argues that, in the full cycle of conflict management, the EU’s actions in conflict prevention, mediation and resolution are inherently overlapping but not always complementary. Therefore, greater coherence and joined-up action across policy areas and across European Union institutions – but also across different phases of conflict/crisis – is yet to be ensured. Coordination of the Union’s actions with external partners before, during and after intervention in a conflict or crisis is of crucial importance as well. In addition, the study suggests that the early warning systems (EWS) and foresight, as regards both the methodology and institutional as well as national capacities, are being – and can be even further – embedded in distinct EU institutions and policies of conflict management and, in particular, of conflict prevention.

The Working Paper can be accessed here.