Dr Andriy TYUSHKA, Senior Research Fellow in the European Neighbourhood Policy Chair at the College of Europe in Natolin, has just co-authored (with Lucyna CZECHOWSKA) a chapter on the future of international cooperation and the role of strategic partnerships in global politics of the 22nd century. 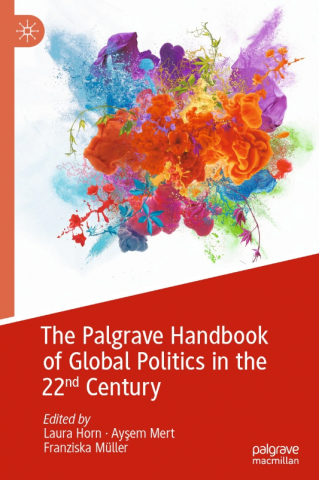 The contribution titled ‘Strategic Partnerships in Twenty-Second Century Global Politics: From Weathering Storms to the Politics of Anticipation’ is part of ‘The Palgrave Handbook of Global Politics in the 22nd Century’ that, by deploying a ‘fictional IR’ approach (and with it charting a ‘qurative turn’ in IR theory), looks into the multiverse of futures the world may develop in between 2022 and 2122.

This collective publication joins the burgeoning literature on thinking the future(s), including alternative futures, scenario-building, and forecasts in International Relations, which is of crucial importance at the times of unpredictability conjoined by prolific and profound changes the international system and global politics have seen for the past decade.

Written in a ‘futur antérieur’ style, Dr TYUSHKA’s co-authored academicized science-fiction and alternate history contribution in ‘fictional IR’ ponders on the evolution of the international system in the 2020s–2120s and, with it, the paradigmatic change in the kind of international actors, the structure of international politics as well as the idea of cooperation and conflict that underlies international interactions.

It does so with a particular focus on the notion of ‘strategic partnerships’ that emerged in the 2000s, substantially proliferated in the 2020s, experienced its clinical death in the mid-2030s, with the resurrection and renaissance of the idea ensuing in the second half of the twenty-first century. Through fictional-factual narrative, the chapter explores and explains how, being initially seen as a substitute of alliances and ad hoc tool for the joint management of critical security or economic issues, strategic partnerships rose to the underlying fabric of international (and interfacial) interactions from the 2050s onwards.