On 31 May 2017, the first edition of the Natolin Football Cup took place at the College of Europe in Natolin. The tournament was organized by the students of the Keynes promotion, supported by the Student Affairs Office and other staff members of the Natolin campus.

The Natolin Football Cup brought together 35 footballers (17 staff members and 18 students), which were divided into 5 teams of 7 players. Inspired by a spirit of integration and inclusiveness, the teams were comprised of male and female players who represented both Keynesians as well as Natolin staff members.

In the group stage, a single round-robin schedule, each team played every other team once, for a total of 10 games played. It was Lucie THIBON who kicked off the tournament with an opening – and more importantly – winning goal against FC Football Power Europe. FC Intellectual Prowess thanks to 9 points, the best goal difference and a stunning performance, ended up winning the group stage.

During the first semi-final, they continued their hunt for the trophy and defeated FC Team No 1 in an extremely tight game, which also required a penalty shoot-out (4-3). Similarly, the Cup was soon within reach of FC La Bestia Blanca after defeating FC Football Power Europe (runner-up of the group stage) in the second semi-final.

The final game was full of exciting moments, tackles and epic saves. The goals by Tural HASANOV and an equalizer by Milosz WIATROWSKI sent the teams to the feared lottery of penalty shoot-outs. Professor Tobias SCHUMACHER's powerful penalty kick sealed the deal for FC La Bestia Blanca, which became the winner of this first edition of the Natolin Football Cup.

Overall, during 108 minutes of played time, 16 goals were scored by 9 different players. The goalkeepers did an outstanding job, holding the number of goals at a low 1.23 per game. All keepers did their best, but there was one who really stood out. Having shown amazing reaction skills and a stunning performance during the penalty shoot-outs, Francesco TAMBURINI was awarded the best goalkeeper prize.

The tournament and BBQ would not have been possible without great teamwork and an immense input by Małgorzata WIŚNIEWSKA and the Student Affairs Office; the Natolin Restaurant; the technicians; the Natolin Bar represented by Remigiusz BAK, Alexander PRENTER, Henrique FONSECA and Roberto REYES IZQUIERDO; the Natolin Football Association (Javier LOPEZ PANOS, Rafael DEL RIEGO and Roman ZAGORODNIY); Łukasz DOBROMIRSKI; students of the Keynes Promotion (Adam ZAHRI, Ia KHODELI, Javier POLO PICASSO and Irakli JGHARKAVA); and our impartial referee Maksym RUDYK.

We hope that this first edition of the Natolin Football Cup laid the corner stone of a new Natolin tradition for years to come. In any case, the event achieved its main goal, which was to bring friends together and celebrate the amazing journey of the Keynes Promotion during the academic year 2016-2017. 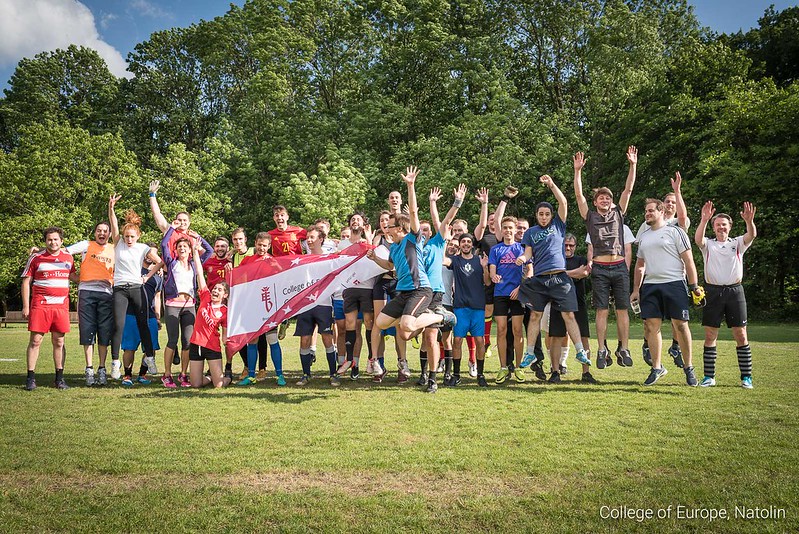