Second ENP Ph.D. Summer School at Natolin - "Between Continuity and Change: The EU, the ENP and the Southern and Eastern Neighbourhood"

The European Neighbourhood Policy Chair organized the Second ENP Ph.D. Summer School, entitled: "Between Continuity and Change: The EU, the ENP and the Southern and Eastern Neighbourhood", which was held from 25 June to 4 July 2014 at the College of Europe, Natolin campus (Warsaw).

The ENP Ph.D. Summer School stands in the tradition of the Europe in the World Ph.D. Summer School series that has been previously hosted by the University of Roskilde (2010), the University of Crete in Rethymno (2011), and the Lisbon University Institute (2012). The event was sponsored and organized by the College of Europe, Natolin (Warsaw) campus, in collaboration with the European Consortium for Political Research, the European Consortium for Political Research - Standing Group on the European Union, the Trans European Policy Studies Association (TEPSA), and the ERC-funded BORDERLANDS project at the Robert Schuman Centre for Advanced Studies at the European University Institute. 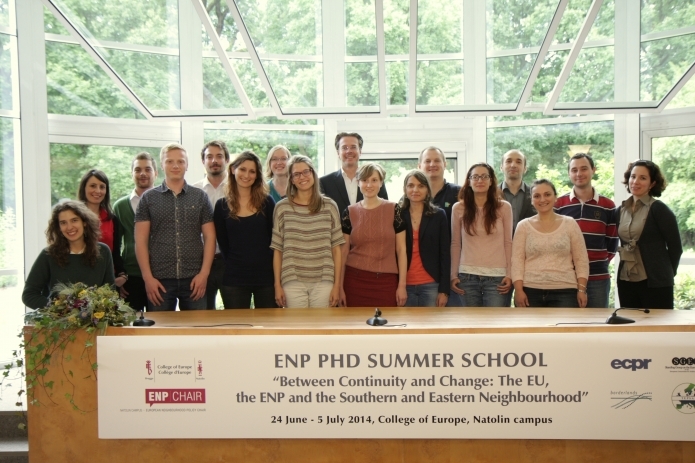 The Ph.D. Summer School focused on the multi-facetted dynamics in the relations between the European Union and its southern and eastern neighbourhoods, particularly within the framework of the revised European Neighbourhood Policy. It addressed the evolution and implications of the revised ENP, the social and political transformations in the EU’s neighbouring countries, issues related to conflict and territorial occupation, and it discussed how the most recent developments in the ENP countries influence EU policies and politics.

The school brought together and trained a group of 16 Ph.D. students from all across Europe in theoretical, empirical and research-strategic issues on the subject matter, as well as encouraged the exchange of their expertise. Additionally, the aim was to support the participants in furthering their research projects. The language of the school was English. For more information please contact maja.olszewska@coleurope.eu and download the full programme here.

The speakers of this year's Ph.D. Summer School were: