Book Launch Presentation: "Partners of First Resort: America, Europe, and the Future of the West" by David MCKEAN and Bart M.J. SZEWCZYK

On 7 December 2020, the College of Europe/Fletcher School of Law and Diplomacy joint Master of Arts in Transatlantic Affairs programme host a book launch presentation of Partners of First Resort: America, Europe, and the Future of the West, co-authored by David MCKEAN and Bart M.J. SZEWCZYK.

David MCKEAN is a senior fellow at the German Marshall Fund of the U.S. Formerly he served as Director of Policy Planning at the U.S. Department of State and as U.S. Ambassador to Luxembourg.

Bart M.J. SZEWCZYK is adjunct professor at Sciences Po in Paris. Formerly he served on the Policy Planning Staff of the U.S. Department of State and as adviser on global affairs at the European Commission’s think tank. 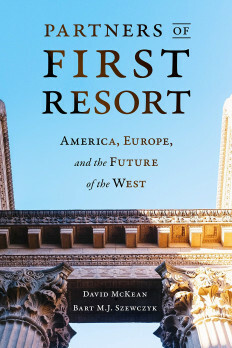 In their new book, the authors outline a “transatlantic renaissance” and reflect on how U.S. and European leaders can work together to craft a new Atlantic Charter that would restore the liberal objectives that animated the Western alliance for more than seven decades and reinvent the transatlantic partnership for the challenges of our time.

“This book of David McKean and Bart M.J. Szewczyk comes on time. In recent years, the concept of ‘the West’ has been eroded, as a community of values as well as of interests. In the past, different accents were placed on both shores of the Atlantic and different sensitivities were shown, but today Europeans do not recognize themselves in the values of today’s official America and our paths even diverge geopolitically. It is time for a ‘reset,’ working together instead of working against each other. Again multilateralism instead of unilateralism. A pivot to the European Union on the American side and for us a pivot to the US. This book radiates that will.” — Herman VAN ROMPUY, former President of the European Council

Participants will be able to submit questions online.

Information to join the event:

How to join a WEBEX event