Climate Transition Lecture by Mr Michał KURTYKA, Minister of Climate and Environment of Poland and President of COP24

On Monday, 15 February 2021, the College of Europe in Natolin had the pleasure of hosting another high-level lecture in the framework of our Climate Transition Lecture Series, titled:

"Current challenges and their overcoming on a state and EU level"

This time around, our honorable guest was Mr Michał KURTYKA, Minister of Climate and Environment of Poland. Mr KURTYKA served as President of the 2018 United Nations Climate Change Conference in Katowice (COP24), which launched the implementation process of the Paris Agreement on Climate Change. Mr KURTYKA is an economist by formation and among other positions served as Secretary of State in the Polish Ministry of Energy. 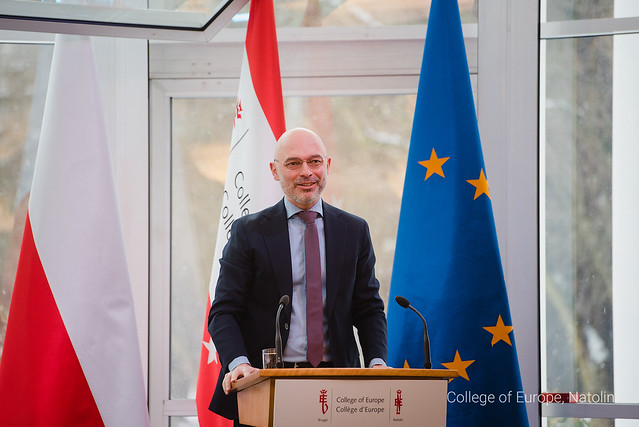 Posing serious multiple challenges to life on the planet, climate change needs a complex response towards a sustainable, carbon-neutral and more just economy. Such systemic transition goes hand in hand with difficult choices across a wide range of sectors - power generation, industry, transport, land use and agriculture, building. Climate action comes also in the form of political decisions, targeted policies, green finance, adaptation and mitigation strategies, and many more. In order for them to prove successful, all these efforts, however, require a social acceptance across political communities. How to define and put in place measures that would be efficient, proportional, and supported by the society always remains a challenge.

What is the approach of Poland towards such challenges? Is the EU ready for successful delivery on the European Green Deal across 27 member states and beyond? These and other intricate questions were addressed by Minister KURTYKA during his special lecture.

The lecture and following Q&A session was moderated by Ambassador Artur LORKOWSKI, Special Envoy for COP24 in Katowice.

Within the framework of the Climate Transition Lecture Series, organised by the Natolin Energy and Climate Governance Nest, we have previously had the pleasure to host the lectures of Ms Patricia ESPINOSA, UNFCCC Executive Secretary and Mrs Laurence TUBIANA, CEO of the European Climate Foundation and Special Representative for COP21.