On 28 October 2020, as part of the "Climate Transition Lecture Series", the College of Europe in Natolin was honoured to host Mrs Laurence TUBIANA, CEO of the European Climate Foundation, Chair of the Board of Governors at the French Development Agency, Professor at Sciences Po and former France’s Climate Change Ambassador and Special Representative for COP21 in Paris. The special online lecture was titled:

"Between (climate) ambition and (social) justice: evolution of the global climate policy framework"

The lecture was inaugurated by Mrs Ewa OŚNIECKA-TAMECKA, Vice-Rector of the College of Europe, and moderated by Ambassador Artur LORKOWSKI, Special Envoy for COP24, which was held in Poland in December 2018.

Mrs Laurence TUBIANA discussed the measures to tackle climate change worldwide agreed at the Paris Agreement on climate change, which was signed ​at the COP21 in Paris on 12 December 2015. Under the auspices of the United Nations Framework Convention on Climate Change (UNFCCC), world leaders committed to limiting temperature rises to "well below 2°C" above preindustrial levels. However, such a transition, influencing a whole global economy, requires the engagement of a variety of different stakeholders from country leaders to labour union activists. Their input is crucial for delivering a fair global framework balancing costs and benefits of global transition to climate neutrality. 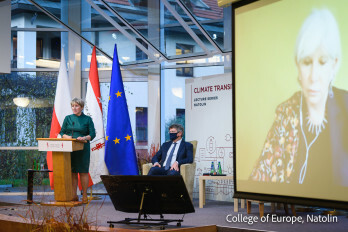 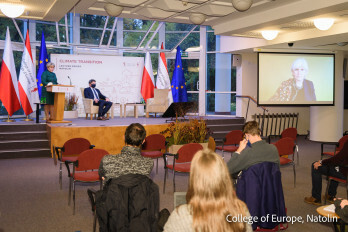 As one of the Convention’s parties, the EU tries to meet these challenges with its own flexible framework that addresses different needs of all internal stakeholders. Just recently, the framework has been extended to include the new, higher ​ambition to reduce greenhouse gases (GHG) emissions. In order to make it in the most efficient way, the EU redesigns internal measures with new mechanisms securing a fair transition of coal regions (Just Transition) influenced by the new legislation and improving competitive advantages of the Union (Carbon Border Adjustment Mechanism).

Designing a flexible framework, which includes feedback from groups of different competencies and socioeconomic status, is a huge challenge. Mrs TUBIANA addressed such questions as: how to meet that challenge? How does the evolution of the UNFCCC process reflect the needs of internally differentiated participants? What are the main risks that can derail a process of global climate change negotiations? How does the EU build the framework that addresses different needs of its stakeholders?

Watch the lecture below: 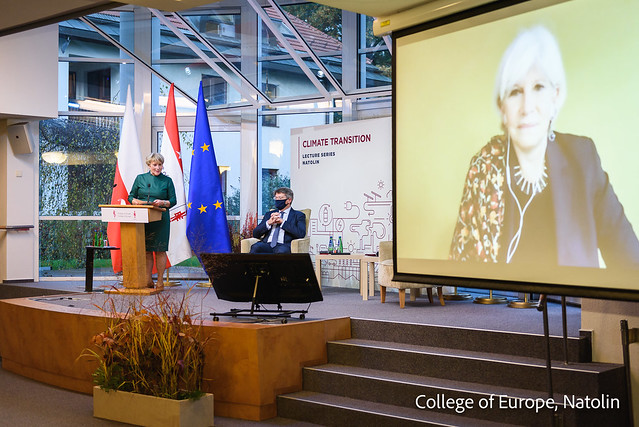