Guest Lecture by Director-General Thomas WESTPHAL: "Some ideas on the future of the European Union or how to rebuild confidence"

On 8 March 2017, Mr Thomas WESTPHAL, Director-General of the German Federal Ministry of Finance, delivered a guest lecture at the College of Europe (Bruges campus), titled: "Some ideas on the future of the European Union or how to rebuild confidence".

Mr Thomas WESTPHAL was born in Hamburg. He is a trained banker and holds a degree in economics. He started his career in Paris at Paribas and at the economic research institute REXECODE. He joined the German Federal Ministry of Economics in 1992 as a desk officer for competition policy. From 1995 to 1998 he worked for the European Commission’s DG MARKT as a national expert. In 1999, he moved to the Federal Ministry of Finance in Berlin. Having been involved in establishing the economic analysis team after the birth of the Eurogroup, he worked with State Secretary Cajo KOCH-WESER.

Then Mr WESTPHAL headed the ECOFIN unit of the Ministry and was the alternate member of the Economic and Financial Committee. From 2005 to 2009, he worked at the German Permanent Representation to the EU as head of the finance department where he contributed to the Council presidency which Germany held in 2007. He returned to the Ministry of Finance as director for the European Economic and Monetary Union in 2009. Since then he is closely involved in resolving the European debt crisis, including the establishment of the first assistance program for Greece, the establishment of the EFSF, the EFSM and the ESM loan programmes. Since 2012 Thomas WESTPHAL is Director-General for European Affairs in the German Federal Ministry of Finance. 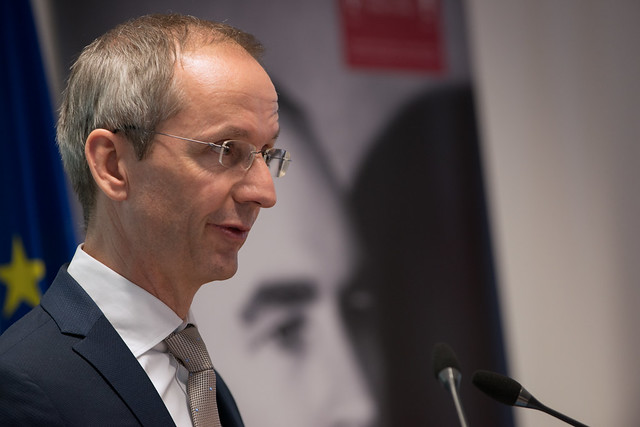 Professor Michele CHANG and Professor Hans GEEROMS kindly invited the students of the College of Europe to attend the guest lecture.

A small reception took place following the lecture at the foyer (Dijver).

Download presentation "Some ideas on the future of the European Union or how to rebuild confidence".