The John Maynard Keynes promotion had the pleasure to invite the College of Europe students and alumni to the annual Hendrik Brugmans Memorial Cup (HBMC).

The HBMC soccer tournament, honouring the first rector of the College, is the sporting event of the year and the Keynes promotion was happy to continue this tradition. Apart from competing for the title, the main objective of the event is to bring students and alumni from different promotions and campuses together, thus strengthening the connection between generations of students. 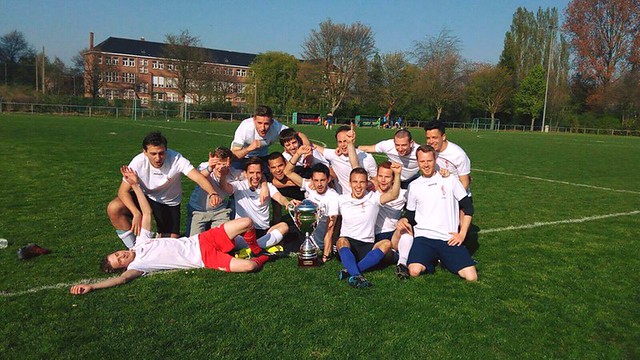 In the female tournament the three teams played against each other. Keynes - Mega Volt ended 1-1, followed by a win of the Chopinettes against Mega Volt with 4-0. In the decisive game, Keynes won against the Chopinettes with 4-1 and with a total of 4 points won the tournament!

The organizers would like to thank everyone for coming and for creating such a great atmosphere!

That same night, the French society had organized their national ball open to all students and alumni. Over 260 students and alumni gathered at the "Studio Hall" for a great dance party with music played by our own student band “The Bloody Maynards” and DJ. The theme of the party was "Festival de Cannes", so the French society awarded the famous "Palme d'Or" to some students for "the most frenchy", "the best pétanque player", "the best football player", "the best dress" and "the most glamorous couple".  It was the best way to end their amazing national Week!