The Juncker Commission declared the Energy Union — announced as a project to make energy more secure, affordable and sustainable — to be one of its political priorities for 2015-2019. A year before the end of this term, the College of Europe European Energy Policy Energy Chair and Stiftung Wissenschaft und Politik (SWP) Berlin looked ahead to the future of the Energy Union, in their high-level conference entitled "Quo Vadis Energy Union" in Berlin on 7 September 2018. 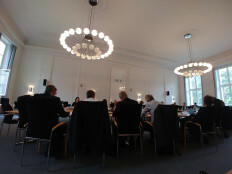 The high-level roundtable consisted of three panel debates and a keynote speech:

As the Chatham House Rule applies to all SWP meetings, participants are free to use the information received, but neither the identity nor the affiliation of the speaker(s), nor that of any other participant, may be revealed. As a matter of confidentiality, photographs, video or audio recordings, as well as all kinds of activities on social media, are not allowed during our meetings.