After our successful first semester study trips to four European "Borderlands", our engaging second semester online study trips encompassing several themes in four different regions ranging from the Baltics to the Middle East, this particular academic year our Natolin students had an unprecedented third opportunity to travel both academically and culturally!

Between 15-18 June 2021, our Natolinians participated in three field trips within Poland – to Mazury, the Tricity and Lublin, during which they were able to further deepen their knowledge acquired throughout their studies at the College of Europe in Natolin.

You could follow our students in their field trips on our Facebook page and on our Twitter page, under the hashtag #NatolinFieldTrips. A photo gallery of the field trips is available below. 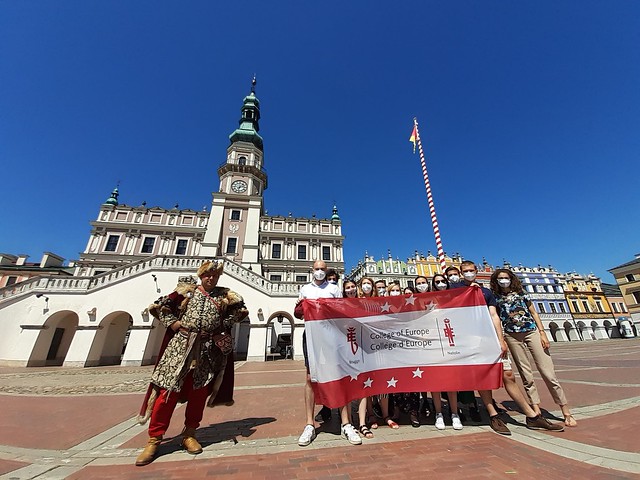 Field Trip to Mazury – Out of Place-Out of Time: Warmia-Masuria on the Peripheries of Identity and Culture 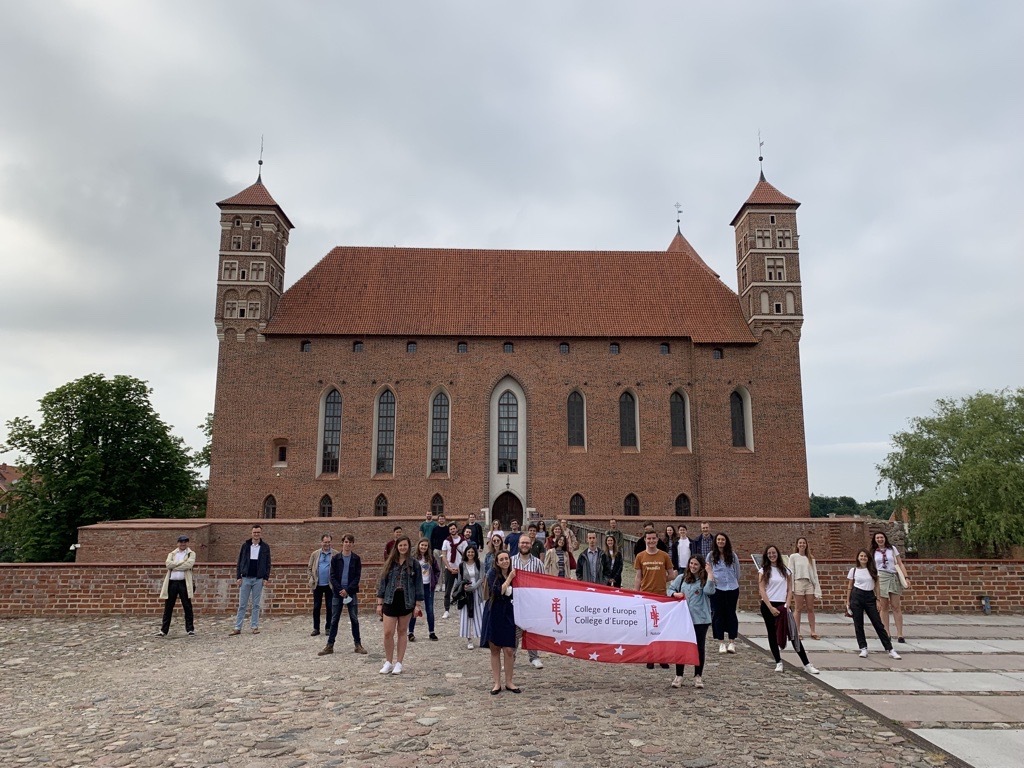 On the first day of the Natolin Field Trips, the Mazury Team's first stop was in the Malbork Castle, the former capital of the Teutonic Knights' State, a breath-taking UNESCO World Heritage site that tells the history of kingdoms, wars, and religion. The guided tour enlightened the significant role of this State in shaping the History of Poland and Europe. In addition, the Malbork Castle stands as a piece of art that reflects the architecture, painting, and sculpture of its times.

After that, the team paid a visit to Nicolaus Copernicus at the castle of the Warmian Bishops in Lidzbark Warmiński, where he worked on the first draft of his revolutionary heliocentric theory. Finally, we celebrated the end of the first day of our field trip by one of the 1000 lakes of Mazury. The participants had the opportunity to have their first swim before sitting around a bonfire and shared the experience of the inspiring first day.

The second day of Team Mazury started at the Instytut Północny with Dr Jerzy KIEŁBIK. He introduced the Polish and German influences in Prussia or Warmia and Mazury from a historical perspective. After that, the team visited the Olsztyn Association of the German Minority in the Copernicus House, where they learned how the German community became an integral part of the history of Olsztyn and the entire region of Warmia and Masuria, including the German language and traditions.

The participants were received in the Mendelsohn House in Olsztyn by Ms Kornelia KUROWSKA, President of the Borussia Foundation. They discussed its impressive accomplishments in fostering intercultural dialogue and popularising knowledge about common heritage. Finally, in the visit to the Wolfsschanze (Wolf's Lair), Team Mazury explored the former headquarters of Adolf Hitler and top German Nazi officials and the scene of the unsuccessful attempt of Graf von Stauffenberg on Hitler's life, which could have changed history. The second day ended at the Muzeum Mazurkie in Owczarnia, where our students explored the daily life of Masurians and where they met with Prof. Wojciech ŁUKOWSKI. He spoke about the evolution of Mazury’s identity over history.

The third day started with the very welcoming Giżycko. Next, they explored one of the sailing routes on the Kisajno lake and its natural beauty. During the boat trip, the students were accompanied by Mr Wojciech DARSKI, a local writer from the Masurian Community who shared his passion for the region's beauty. The second destination was the Lutheran Church of Giżycko, where the students learned about the complex nature of Masurian identity from Dr Robert KEMPA, Head of Giżycko City Council and member of the Synod of the Lutheran Church. Dr KEMPA said that "there would be no Masurians without the Lutheran Church". Finally, in the afternoon, they visited the Greek Catholic Church of St. Jozafat Kuncewicz in Kruklanki. They heard a testimony of the tragic history of the Ukrainian Community forcibly displaced to Masuria and how they managed to create their "Little Ukraine" here.

The team started the last day from the exhibition in the town hall of Olsztynek, a visit that fostered discussion on the history of World War I and its commemoration (the battle of Tannenberg and Hindenburg's Mausoleum), as well as the fate of the prisoners of Stalag I B during World War II. Next, the participants seized the opportunity to visit Olsztyn to meet Prof. Robert TRABA from the Polish Academy of Sciences and learn about the process of "domesticating" a place and inventing traditions in Warmia and Mazury. On the way back to Natolin, students visited the Święta Lipka sanctuary. "This basilica in the middle of nowhere is itself a miracle", said Fr. Roman GROSZEWSKI SJ, who introduced Team Mazury to its fascinating history, which is inseparable from Jesuits. Students also enjoyed a delightful pipe organ concert.

Field Trip to the Tricity (Gdańsk, Gdynia, Sopot) – ​​​​​​On the Edges and at the Centre: Europe’s 20th century 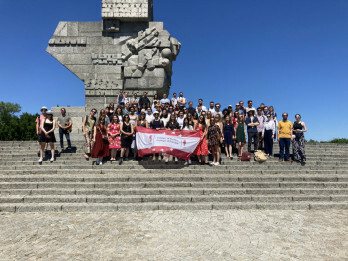 On Tuesday, Team Tricity started our day early to head to one of the oldest cities in Poland – Gdańsk. During the day, students participated in a guided tour of the city with Mr Kacper DZIEKAN, a representative of the European Solidarity Centre. They explored its history from the early times and foundations in the early Polish state passing to its status as the capital of the Pomerelian Duchy, as part of the Monastic State of the Teutonic Knights, as part of the Kingdom of Poland, as the Free City of Danzig, as part of the Kingdom of Prussia, in times of World War II and, finally, in the post-World War II period. In this way, students learned about the city's role within different periods of history, about the significance of its port. They had a chance to contemplate some of its historical monuments and venues.

On Wednesday, Team Tricity started the day with a lecture on the history of Gdańsk from the medieval to the modern period with Ms Malgorzata POPIS. After, students attended a panel discussion on the multicultural nature of Gdańsk hosted by the Baltic Cultural Centre. Students had an opportunity to discuss the life of minority communities in Gdańsk with representatives of the Jewish, German, Ukrainian, and Kashubian communities.

In the afternoon, students could choose between two different projects. The first one was a visit to the Emigration Museum in Gdynia. The group explored the history of 200 years of Polish migrants and met with the Deputy Director of the museum Mr TYRAKOWSKI. The visit was followed by a tour of the city of Gdynia, a jewel of modernist architecture. The other project was a visit to the Shakespeare Theater of Gdańsk, built to commemorate the old "Fencing School" where English actors performed during the XVII century. Here, students learned about the cultural exchanges of the early modern period.

On Thursday, the group continued exploring the long and rich story of the city of Gdańsk and the Tricity as a whole. The program started with a lecture on the history of the Tricity during the interwar period and the Second World War by Mr Grzegorz LIPSKI. After the presentation, students had the chance to walk to the Gdańsk Post Office, where Polish soldiers resisted the first German Nazi attack of WWII and learned about the renovation process of some parts of Gdańsk. Later, the city visit continued on a boat – students went down to the Westerplatte Peninsula, where the first shots were fired in the morning on the 1st of September 1939. In the afternoon, students were divided into three groups. The first group continued the discovery of the history of Gdańsk in the Second World War Museum. The second group visited the National Museum of Gdańsk, and the third group had a meeting with the Polish Border Guards on the Baltic Sea Region Control Cooperation to learn more about the current functioning of the port city.

On Friday, students started the program with a visit to the European Centre of Solidarity to learn more about the fall of Communism in Europe and about the leaders and activists of the movement. The group had the exceptional opportunity to meet in the museum Mr Lech WAŁĘSA – the former President of Poland and the founder of Solidarność – who gave an inspiring speech to our students. The program ended with a visit to Wyspa Sobieszczewska, where students could spend some time in the natural reserve. 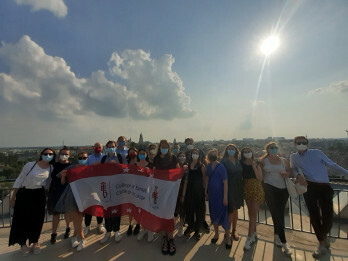 Team Lublin’s first stop introduced the students to the history of one of the most prominent noble families of Central-Eastern Europe – the Zamoyski family. In addition to the estate in Kozłówka, the program included a tour of the socialist realism art gallery. The team continued the day with a meeting on the role of two Lublin-based foundations in promoting democracy and youth participation locally and involving partners from the Eastern Neighbourhood (Sempre a Frente Foundation and the Foundation in support of local democracy).

The students concluded the first day of the field trip with a highly insightful encounter with Mr Krzysztof STANOWSKI, Head of the International Cooperation Center at the Lublin City Hall, who shared his experience in enhancing Lublin's relations with Eastern Partnership cities and beyond.

Wednesday began with a series of academic events organized at the Catholic University of Lublin (KUL). First, a historical (and critical) introduction to the Polish-Lithuanian Commonwealth established by the Union of Lublin in 1569. Then, a panel discussion on the EU external policy towards the Eastern Partnership countries, featuring experts from the KUL, the Maria Curie-Skłodowska University, and the Institute for Central Europe.

The third event of the day was a meeting at the Cultural Centre Warsztaty Kultury w Lublinie. The Head of the Publishing Department gave a presentation mainly focused on the translation projects carried out by the institution, aiming at bringing closer Belarus, Lithuania, Poland, and Ukraine through literature. Finally, the group ended the day with a comprehensive guided tour of the city of Lublin, including the unique Chapel of the Holy Trinity.

The third day of the field trip featured the guided tour of Zamość – the city founded by the Zamoyski noble family. Based in the 16th century and populated mainly by merchants of different nationalities and religions, the city remains a beautiful historic site and has the status of the UNESCO World Heritage site since 1992. Its well-preserved Renaissance architecture style and its troubled history make it an ideal destination to enrich students' understanding of Central and Eastern Europe. For students interested in Holocaust studies, Zamość also includes a synagogue and other relics of a bygone age when almost half of the inhabitants of Zamość were of Jewish origin.

The group ended the field trip in Zwierzyniec, the former administrative centre of the Zamoyski family entail. In addition to a short guided tour through the relic of this glorious past, the participants visited the Zwierzyniec brewery, founded by the Zamoyski family at the beginning of the 19th century (run by Englishmen until the middle of this century). The last activity was a short tour of the Roztocze national park, renowned for its rich fauna and flora.