On the occasion of the 20th anniversary of the Optional Protocol to the Convention on the Rights of the Child on the involvement of children on armed conflict, as well as in light of the International Children’s Day on 20 November 2020, and taking advantage of Belgium’s chairmanship of the working group on children and armed conflicts within the United Nations Security Council, the Embassy of Belgium in Warsaw and the College of Europe in Natolin organised an online international conference on:

"The Protection of Children in Armed Conflict: Two Decades of Institutional and Humanitarian Action"

The conference was live-streamed on this website, our Youtube and Facebook channels. The full video of the conference is available here and our photo gallery below. 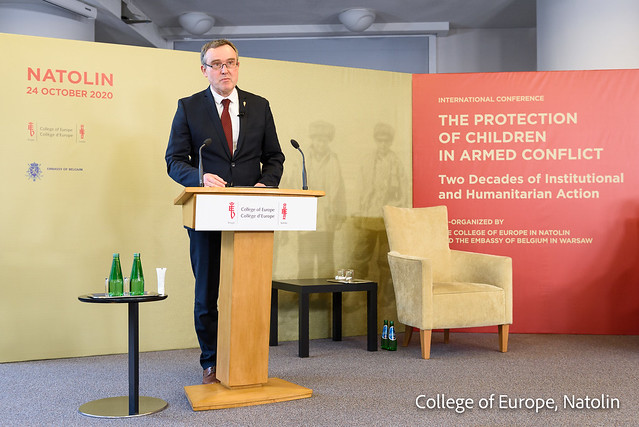 The goal of the conference was to take stock of the actions undertaken both at the institutional and humanitarian level over the last two decades with the aim to guarantee the protection of children in armed conflicts.

The conference, co-organized by the Embassy of Belgium in Warsaw and the College of Europe in Natolin, and in partnership with the Ministry of Foreign Affairs of Poland and the Embassies of Canada, France, Germany, Mexico and Norway, gathered experts from governments and international fora, as well as from international and non-governmental organizations working in the field.

The biographies of the panelists are available here and the full programme of the conference below.

Moderator: Elżbieta MIKOS-SKUZA, Associate Professor of Public International Law at the University of Warsaw, Visiting Professor at the College of Europe in Natolin

Moderator: Anne-Sophie MASSA, First Secretary and Consul at the Embassy of Belgium in Warsaw

Photo courtesy: 2016 documentary ‘The Land of the Enlightened’ directed by Pieter-Jan DE PUE