Seminar: "The EU and East Asia: Diplomacy and Politics"

In the last few years, the diplomatic and political situation in East Asia has greatly evolved. On the one hand, the key security challenge in the Korean Peninsula has flared up, with both tensions and chances of dialogue at both regional and international levels. On the other, with the development of the Belt and Road Initiative, the increasingly bold dynamism of China’s foreign policy has met a wide range of reactions from other Asian countries, sometimes raising concerns in Europe. As a consequence, the European Union has been trying to redefine its role in the security and development of East Asia, also in light of the publication of the EU Connectivity Strategy towards Asia in September 2018.

The Baillet Latour Chair of European Union-China Relations and the EU-China Research Centre, Department of EU International Relations and Diplomacy Studies, organised a seminar on 19 March 2019, gathering high-profile speakers from diplomacy and the academia to discuss the topic "The EU and East Asia: Diplomacy and Politics". Participation was reserved to the students of the College of Europe in order for them to fully interact with the panel of distinguished guest.

The speakers for the seminar were:

The aim of this seminar, which was chaired by Professor Jing MEN, was taking stock of the evolution that has occurred in the East Asian economic and security complex in the most recent years, particularly concerning the Korean peninsula and China’s activism with the Belt and Road Initiative, as well as the EU’s perspectives in this region in line with its Connectivity Strategy towards Asia.

Thanks to a lively and insightful discussion between the speakers and the student audience, the seminar successfully sketched the current state of relations between the EU and East Asia, focusing on three main issues: 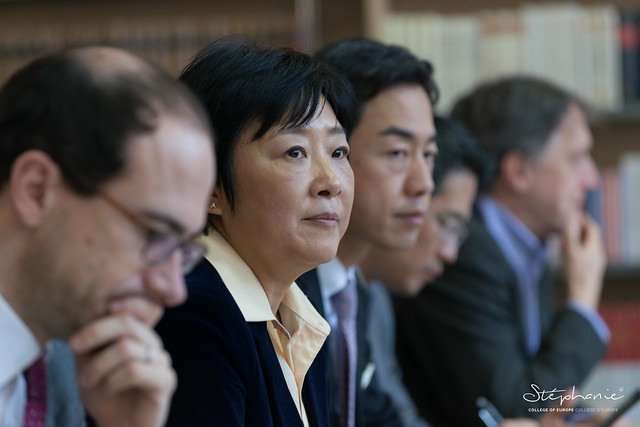