On Thursday 24 October 2019, the College of Europe in Natolin had the pleasure to host Mr Pierre HEILBRONN, Vice President of the European Bank for Reconstruction and Development, for a special lecture in the framework of the Meet the Professionals series.

Multilateralism at the cross-roads: the future of the European development finance architecture

Old and new global challenges are rapidly shaping the world’s political landscape and in responding to them, the European Union urgently needs to rethink its policy priorities for external action and development. At the same time, discussions among EU Member States on the next 2021-2027 multiyear EU budget are on-going and a new European Commission is in the making. Can Europe uphold its leadership role in strengthening multilateralism while adapting its institutions to a new geopolitical environment? 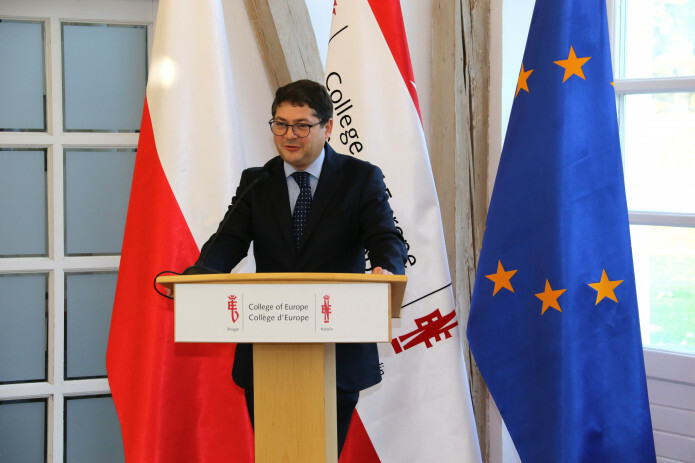 Pierre HEILBRONN is a member of the EBRD Executive Committee leading on the Bank’s economic, policy and reform agenda, including its coordination within country strategies and with European member states and institutions, managing bilateral and multilateral donor partnerships and ensuring an inclusive engagement of the civil society.

Before joining the EBRD in November 2016, he was deputy chief of staff for France’s Minister of Economy and Finance. Before that, he served as the European advisor of the French Prime Minister and acting General Secretary for European Affairs. Earlier in his career, he assisted in the creation of the European External Action Service. As acting head of Cabinet of the European Commissioner for External Relations and Management of Development Aid, he worked on the Neighborhood policy and on the management of EU development aid at the programming cycle.

Pierre HEILBRONN started his career in the French Ministry of Foreign Affairs (Department of European cooperation) and the Ministry of Finance. He graduated from the Institut d’Etudes politiques de Paris and the Ecole nationale d’administration (ENA). He holds a Master of Economics from Cambridge University and a Master of European Studies from the College of Europe in Bruges. He also studied in Yale University and Georgetown University.