This lecture discussed to what extent the Court of Justice has regard to economic reasoning in competition law cases. It took as a starting point judgments where the Court has been called upon to consider ostensibly anticompetitive behaviour.  These judgments arise most often from abuse of dominance cases.  It is evident that economic reasoning is implicit, and is subsumed into a form of legal analysis peculiar to competition law.

Rector MONAR officially conferred the title of Honorary Professor to Professor VAN DE WALLE DE GHELCKE for 23 years of teaching at the College of Europe in the Department of European Economic Studies.

This lecture was open to the public. 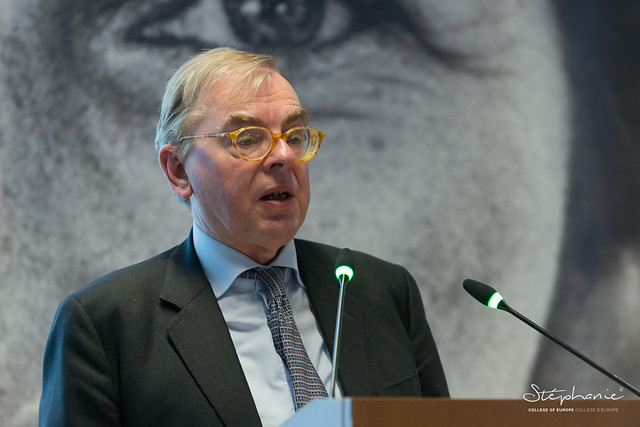 Bernard VAN DE WALLE DE GHELCKE graduated at the Law Faculty of the KU Leuven University (KUL) and holds specialist degrees in European Law from KU Leuven and in Economic Law from the Université Libre de Bruxelles (ULB). He is a member of the Brussels bar since 1979 and was a partner at Linklaters LLP until 2010. He is currently of counsel in the Brussels Office of Linklaters.  As a practitioner he specialises in EU Law, free movement, competition law and State aid.

Bernard VAN DE WALLE DE GHELCKE is founding member and past president of the Global Competition Law Centre of the College of Europe and was a member of its Executive Committee until 2014. He is also former president and was until 2017 member of the editorial board of Tijdschrift voor Belgische Mededinging/Revue de Concurrence Belge.

Bernard VAN DE WALLE DE GHELCKE is the author of various publications of European Law and Competition Law and regularly speaks at conferences and seminars.

If you have any queries, please contact Tamara NICOLAESCU, Academic Assistant.