International Conference "The Neighbours of the EU's Neighbours: Diplomatic and Geopolitical Dimensions beyond the ENP"

The international conference “The Neighbours of the EU’s Neighbours: Diplomatic and Geopolitical Dimensions beyond the ENP”, organised by the Department of EU International Relations and Diplomacy Studies together with its TOTAL Chair of EU Foreign Policy on 15-16 November 2012, gathered scholars and practitioners from the EU and beyond to reflect on the European Union’s wider neighbourhood. This conference was organised with the financial support of the European Commission and TOTAL.

The conference was opened by keynote speaker David O’SULLIVAN, Chief Operating Officer of the European External Action Service. The conference went on to focus on the geopolitical dimensions beyond the ENP in panels dedicated to the different regions as well as a number of diplomatic aspects such as the role of other global players and the perspectives from the countries at hand.

A major conclusion of the conference was that the European Union might want to consider drafting a Strategy on the Neighbours of the EU’s Neighbours. This strategy could focus on building bridges across the different (sub-) regions by drawing on and further developing the interfaces between them, such as funding for common projects, linking trade agreements and creating synergies between the different co-operation frameworks and instruments. It would provide a comprehensive strategic framework that would help define a more coherent and efficient approach towards the neighbours of the EU’s neighbours. 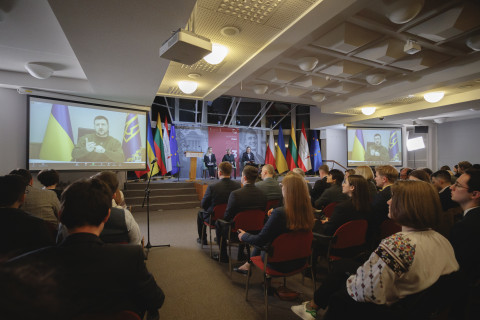