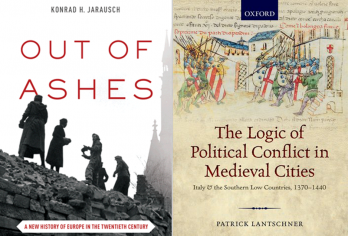 On 22 November 2016, the Chapter voted to award this year’s main prize to Professor Konrad H. JARAUSCH for his book Out of Ashes: A New History of Europe in the Twentieth Century, published by Princeton University Press.

The Chapter also voted to award the prize for an outstanding first book to Dr Patrick LANTSCHNER for his book The Logic of Political Conflict in Medieval Cities: Italy and the Southern Low Countries, 1370-1440, published by Oxford University Press.

Dr LANTSCHNER, who obtained his Bachelor’s, Master’s and doctoral degrees from the University of Oxford, is Lecturer in the Department of History of University College London. Previously he held a Junior Research Fellowship at Merton College Oxford, and has also taught at the University of Cambridge. His main research is on medieval cities and other systems of political organization, and he is interested in comparative and transnational approaches to Mediterranean history that cross conventional distinctions between Europe and the Islamic world.

Professor JARAUSCH will deliver a lecture, and Dr LANTSCHNER will give a presentation about the themes of their books during the award ceremony. This will be held at the Natolin campus of the College of Europe in the spring of 2017.

The Prize was initiated and is funded by the College of Europe Natolin Campus and its European Civilization Chair, in cooperation with the Foundation Professor Bronisław Geremek Centre. For information on the 2015 winners click here.