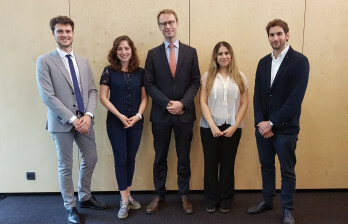 A student team from the Department of EU International Relations and Diplomacy Studies participated in an international competition of universities, organised by the George Washington University, on the topic of "Fulfilling NATO's burden-sharing commitments: Advocacy and policy proposals from the Alliance’s young leaders".

For the first step in February 2019, 13 university teams submitted videos on the question whether NATO allies should commit to spending at least 2% of their GDP on defence. On this basis, the College team (Jan LEPEU, Emerick LOVASZ, Khrystyna PARANDII, Paolo RECALDINI, Roy TZIVRA, Cecilia VIDOTTO and Colin WALL) was selected to participate in the final round consisting of three days of debates, seminars, and simulations on NATO burden sharing and the future of the Alliance, taking place in Brussels from 17-19 June 2019.

On the first day, after four intense rounds of debate among the eight finalist teams, judged by an international jury, the College students achieved the honourable third place behind the teams of the University of Macedonia, Greece, and of Carleton University, Canada. On the second day, the students actively participated in several workshops with high-level speakers from universities, think tanks and NATO Missions. Among the speakers was also Professor Alexander MATTELAER whose course on "European Defence Cooperation and NATO" the students had been following at the College. On the third day, a NATO Model simulation under the guidance of European military officers took place, with an original scenario revolving around Russian activities in the Arctic and their relevance for NATO.

The students played the roles of different Permanent Representatives in the North Atlantic Council, engaging in intense negotiations and contributing innovative ideas on how to guarantee security in the region. This simulation, developed by the George Washington University and NATO’s Allied Command Transformation, was a suitable conclusion to the NATO Debates, as it provided the opportunity to reflect and build on the new knowledge and skills acquired throughout the event.