On 28 April 2020, the students of the Master of Arts in Transatlantic Affairs programme participated in the third and final lecture on major topics in transatlantic affairs. Two distinguished speakers, Jason KHILE, the Deputy Public Affairs Officer/Spokesperson at the United States Mission to the European Union, and Tara MAHER, Political Officer at the U.S. Mission to the European Union, discussed with the students the threats of disinformation, what governments and their partners are doing to counter it and what has been the U.S.-EU cooperation on this issue. 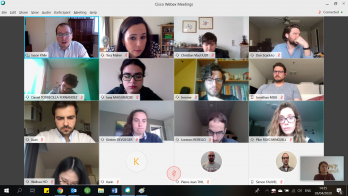 The second lecture, on 19 February 2020, was given by Giles SCOTT-SMITH, Professor and Roosevelt Chair in New Diplomatic History at Leiden University, and focused on "Transatlantic Public Diplomacy and the Case of NATO". The students had a chance to learn about the history and practice of public diplomacy by NATO, and how these activities have evolved into the 21st century. Participants of the lecture also presented their own ideas on how NATO could be more effective in communicating its mission to the citizens of the Alliance’s member states as well as external partners.

The first lecture of the MATA Spring Mini-Lecture Series took place on 29 January 2020. Bart SZEWCZYK, Adviser on Global Affairs at I.D.E.A., the European Commission’s in-house think tank (formerly European Political Strategy Centre) and Non-Resident Senior Fellow at the German Marshall Fund in Brussels, gave a lecture on "Contemporary EU-US relations and NATO" and shared with the students his ideas on what U.S. and European leaders needed to do for a "transatlantic renaissance".

The MATA Spring Mini-Lecture Series aim to offer students in the Master of Arts in Transatlantic Affairs (MATA) the opportunity to exchange with specialists of transatlantic relations about major contemporary topics in transatlantic affairs.