Master of Arts in Transatlantic Affairs: Study Trip to Brussels

On 20 February 2020, in the framework of the joint College of Europe-Fletcher School Master of Arts in Transatlantic Affairs (MATA), the College of Europe organised a one-day study trip to Brussels. First- and second-year students of the programme had the chance to meet with various stakeholders working on transatlantic relations. They visited the U.S. Mission to the EU, the European External Action Service (U.S. and Canada division), the German Marshall Fund of the United States, and the Mission of Canada to the European Union.

In the U.S. Mission to the EU, the students had the opportunity for an exchange with Mark LIBBY, Deputy Chief of Mission, and Chris ZIMMER, Political Officer. Both speakers discussed various areas for cooperation between the EU and the U.S.

At the European External Action Service, the students were welcomed by Javier NINO PEREZ, Head of Division ‘United States and Canada’, and his team. Many topics that are currently central to transatlantic affairs were discussed as the students asked various questions on economic and trade issues, public and cultural diplomacy, cooperation between EU and US on women rights, and the nature of relations between EU and Canada today.

The next meeting took place in the Brussels office of the German Marshall Fund of the United States (GMF). During a roundtable with Bruno LÉTÉ, Senior Fellow of Security and Defense, Peter CHASE, Resident Senior Fellow, and the two trainees Maxime SIERRO and Patrycja PAŃCZYK, the students learned about GMF’s unique mission and various activities aimed at strengthening transatlantic cooperation around the world.

The final part of the visit took place at the Mission of Canada to the EU where the participants met with Robert SINCLAIR, Deputy Head of Mission, and Jarrett RECKSEIDLER, Senior Political Affairs Officer. The Strategic Partnership Agreement between the EU and Canada was discussed as well as various other area of cooperation, such as trade, technology, fight against disinformation and the environment.

These discussions allowed students to broaden their understanding of the current state of EU-U.S. and EU-Canada relations and engage with some of the key stakeholders in  contemporary transatlantic affairs, several of whom are College of Europe alumni.

The College of Europe would like to thank all the partners for their warm welcome and cooperation. 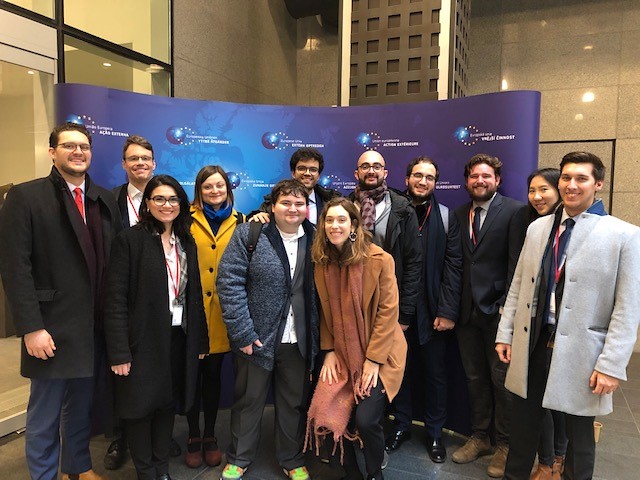