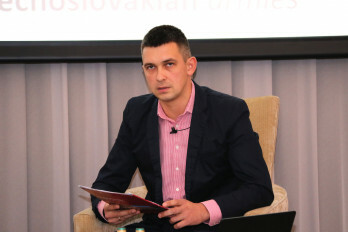 On Wednesday 23 October 2019, the European Civilization Chair hosted a meeting with Dr Liubomyr KHAKHULA of the Lviv History Museum, who spoke about "Two Ukrainian Historical Memories about World War II: Kyiv and Lviv".

Dr KHAKHULA noted that Ukrainian cultural memory of the Second World War is generously exhibited in museums. Since the proclamation of Ukraine’s independence in 1991, differences and contrasts in the interpretations of twentieth-century history and its heroes or villains have remained sharp. The burden of the Soviet ideological construct of “The Great Patriotic War” (widespread mainly in central and eastern Ukraine) and the émigré interpretation of people’s participation in the war as a liberation struggle of the Ukrainian Nation (western Ukraine’s discourse) have weighed heavily on Ukrainian memories. After the Ukrainian Revolution of 2013-14, a shift took place in historical representations of the Second World War and the construction of new national myths began (such as the Heavenly Hundred Heroes).

The presentation demonstrated the differences in the interpretation of World War II, using the example of the exhibitions in the National Museum of History of Ukraine in the Second World War in Kyiv (which until 2015 was called the Ukrainian National Museum of the History of the Great Patriotic War of 1941-1945) and the Museum of Ukraine’s Liberation Struggle in Lviv. The presentation also covered Ukraine’s current politics of history and the state of research on the subject. A lively discussion followed with students of the Hannah Arendt Promotion, moderated by Professor Richard BUTTERWICK-PAWLIKOWSKI. 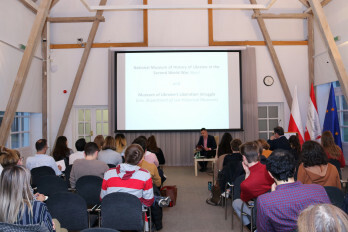 Dr KHAKHULA graduated in History from the Ivan Franko University in Lviv, before completing his doctorate at the Ivan Krypiakevych Institute of Ukrainian Studies at the Ukrainian National Academy of Sciences – of which he was deputy director for scientific matters in 2017/18. The outcome of his doctoral thesis, defended in 2013, was the book Rizuny chy pobratymy? Suchasni polski dyskursy pro Ukraiinu [Murderers or Brethren? Contemporary Polish Discourses on Ukraine], published in 2016. He is engaged in the design and realization of a new permanent exhibition on the history of Lviv since the twelfth century and the importance of its multicultural heritage for East-Central  Europe as a whole. The European Civilization Chair at Natolin is currently hosting Dr Khakhula for two months, as part of his stage within the annual Ivan Vyhovskyi Prize awarded by a consortium of Polish universities and institutions of higher education, including the College of Europe Natolin.