Support to the Diplomatic School of Armenia 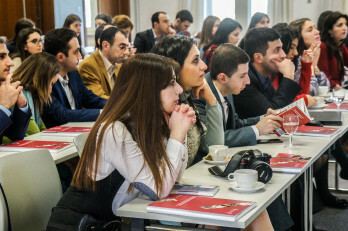 Since 2011, the College of Europe Development Office has been supporting the Diplomatic School of Armenia through the use of EU funds. The most recent contract through which this support is given, is a one-year project led by ARS Progetti under the Framework Contract Beneficiaries 2013 – Lot 7: "Support to Diplomatic School at the Ministry of Foreign Affairs, Armenia."

The project, which began in September 2017, aims at further developing the capacity and sustainability of the Diplomatic School in a long-term perspective; enhancing the experience of students and diplomats; improving international cooperation of the School; and developing the School’s resources.

The College of Europe, through the Development Office, is in charge of several activities and, specifically, it is currently organizing a study visit for this year’s promotion of students (enrolled in the EU International Relations and Diplomacy Studies programme), which will take place in Strasbourg and Brussels from 22 to 28 April 2018. The students will be able to meet officials from various EU institutions and international organizations such as the European Commission, the EEAS, NATO, the Council of the EU, the European Court of Human Rights, and the Council of Europe.

Another activity has been the facilitation of internships for young graduates of the Diplomatic School, currently diplomats at the Armenian Ministry of Foreign Affairs. Four young diplomats have been selected and were sent to Strasbourg, Vienna, Geneva, and Brussels for 8 weeks (February-March 2018) to work in the Armenian Embassies in these cities.

Finally, the library of the Diplomatic School is also supported by purchasing books and other materials.

coleurope.eu/projects
All NEWS from the College of Europe Development Office

The College of Europe Development Office is in charge of several activities and, specifically, it is currently organizing a study visit for the this year’s promotion of students which will take place in Strasbourg and Brussels from 22 to 28 April 2018.