From 14 to 19 November 2022, Rector Mogherini travelled to the East Coast of the United States for a week of meetings with various organisations, government representatives, academics and alumni, as well as to participate in university events.

On Monday, 14 November, Rector Mogherini attended a College of Europe alumni event hosted in the Residence of the EU by H.E. Ambassador Stavros Lambrinidis, Ambassador of the European Union to the United States and Deputy Ambassador and College alumnus, Michael Curtis, followed by a dinner for invited guests. 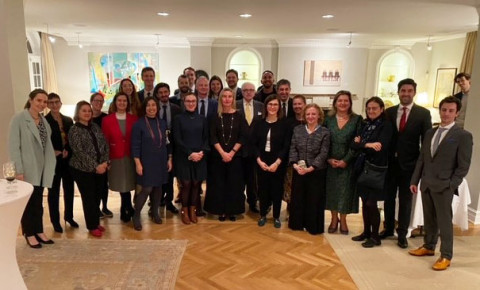 On Tuesday, 15 November, Rector Federica Mogherini spoke at American University (AU) / American University School of International Service on "Transatlantic Cooperation amidst Fragmentation and Shocks". Many students and faculty asked questions on issues ranging from Russia's invasion of Ukraine, relations with China, the status of EU defense, and threats to democratic values on both sides of the Atlantic. The event was moderated by Prof. Garret Martin, Co-Director of AU's Transatlantic Policy Center.

On Wednesday, 16 November, Rector Mogehrini participated, as a guest lecturer, in the final session of Prof. Shattuck's MATA course "NATO, Transatlantic Security, and the Future of Transatlantic Relations", attended by the MATA students of the joint program offered by the Fletcher School and the College of Europe.

In between academic engagements, Rector Mogherini had meetings, inter alia, at the Italian Embassy to the US, at the Institute for National Strategic Studies at National Defense University and the Delegation of the European Union to the United Nations.

As an Opening Speaker, Rector Mogherini contributed to 8th edition of the annual the student-led Conference on Gender and International Affairs (CGIA)— Challenging for Change: Amplifying Voices into Action.: 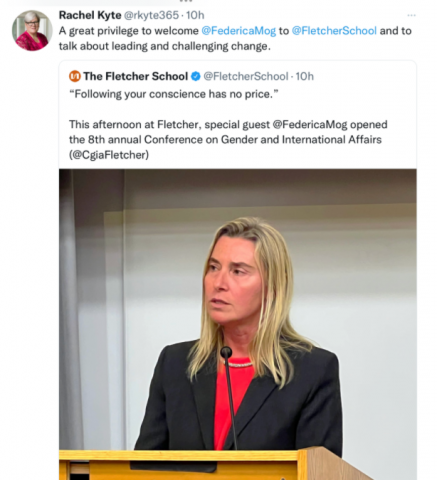