Conference - The Neighbours of the EU’s Neighbours: Legal, Political, Security and Socio-Economic Challenges beyond the ENP

On 21-22 March 2013, the Department of EU International Relations and Diplomacy Studies at the College of Europe in Bruges is organising an international conference to discuss specific policy challenges in the European Union’s broader neighbourhood (Sahel, Horn of Africa, Middle East, Central Asia).

The conference will focus on technical and sectoral issues such as political and legal challenges; security and military challenges; socio-economic challenges as well as concrete measures to connect the neighbours of the EU’s neighbours. It follows up on a conference held in November 2012 which examined the geopolitical and diplomatic dimensions beyond the ENP. This first conference had concluded that the EU might want to consider drafting a Strategy on the Neighbours of the EU’s Neighbours which would focus on building bridges across the different (sub-)regions by drawing on and further developing the interfaces between them.

(2) Study tools for ensuring implementation and application of EU law and evaluation of their effectiveness (European Parliament);

(3) Study on the feasibility and effectiveness of tax policy changes (DG DEVCO).

As part of various contracts and project partnerships with Brussels-based consultancies, think-tanks and European universities, the College of Europe through its Development Office is providing its expertise in legal and economic research on various fields.

(1) For the European Commission’s DG MARKT, the College of Europe is contributing to undertake a study devoted to analyse thoroughly unfair trading practices between businesses along the retail chain, with the aim to explore their impact on internal market, especially for what concerns problems of legal fragmentation, inconsistency, weak implementation and/or enforcement. The period of implementation of the study is of 11 months, and at the end of this period the College and its partners, will submit a comprehensive report, including on the one hand the mapping and comparative analysis of national approaches and a preliminary impact assessment of possible policy options to solve the policy problem identified, and on the other hand a concise explanation of the status quo in terms of unfair B2B practices in the retail chain, existing literature and statistical data, national approaches to the issue and possible options to solve outstanding problems.

(2) For the European Parliament, the College of Europe is providing its expertise to the study of the effectiveness of certain implementation tools of EU law including hurdles and best practices for the transposition of EU law at national level. The implementation period of this study is of 4 months and its aim is to assess the effectiveness of compliance promoting tools (such as correlation tables, implementation plans, guidelines, ‘fitness checks’ etc.) in four areas: internal market, environment, citizenship and fundamental rights, and judicial cooperation.

(3) For the European Commission’s DG DEVCO, the College of Europe is contributing to the “Study on the feasibility and effectiveness of tax policy changes”. The implementation period is of 13 months. This study is aiming to enhance understanding and collect evidence on the feasibility and effectiveness of tax policy reforms from a comparative perspective, in nine developing countries. It is expected that the study will inform the policy dialogue of the European Union with partner countries on domestic resource mobilisation, in particular in the context of budget support. 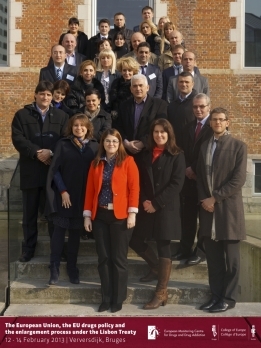 On 12-14 February 2013, the College of Europe has organised for the EMCDDA the Reitox Academy on The European Union, the EU drugs policy and the enlargement process under the Lisbon Treaty, in Bruges and Brussels.

In October 2012, the College of Europe was awarded by the EMCDDA the contract to organize a Reitox Academy, a tailored-made training programme on the EU, the EU drugs policy and the enlargement process under the Lisbon Treaty. The beneficiaries of this professional training course are the IPA beneficiaries (Western-Balkan countries, and Turkey) for participating in the EMCDDA. The main rationale of the project is therefore to extend the circle of civil servants acquainted with EU drug coordination and monitoring activities to those who will have responsibilities in this field in the near future and to specialised national experts and practitioners who need to develop their own expertise in order to become resource points, not only on drug monitoring, but also on broad range of EU drug-related issues. The tailored course included interactive lectures on the Post-Lisbon EU and the enlargement policy, on drafting and implementing EU policies, a panel discussion with representatives of the EU institutions working on drugs-related matters, a simulation of negotiations at EU level, as well as a workshop on EU funds and key aspects of the Project Cycle Management. 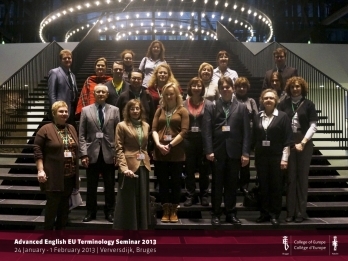 Within the framework of the cooperation agreement between the European Studies Institute at MGIMO University in Moscow and the College of Europe, the Development Office organised in Bruges from 24 January to 1 February 2013 a seminar on Advanced English EU Terminology for 20 Russian English-language teachers.

This training has been organized yearly since 2007, and is part of the activities offered by the College of Europe to the European Studies Institute at MGIMO. This year’s programme counted with some distinctive features and particularly focused on the various aspects of EU legal language and terminology. The group of professors also had the opportunity to attend a hearing of a case at the European Court of Justice in Luxembourg and to participate in a study visit to the European Commission’s DG Interpretation in Brussels.

From 23 to 25 April 2013, the College of Europe Development Office will organise in Barcelona a training seminar in the framework of the ENP regional project “Preparing staff for EU-ENP related jobs”, on EUROMED for 32 public administration officials coming from the ENP-south countries.

In the framework of the ENP regional project “Preparing staff for EU-ENP related jobs”, already 8 training seminars have been organised and delivered by the College of Europe in its two campuses in Bruges, Belgium and Natolin, Poland in 2011 and 2012 and 7 more training seminars will be organised in 2013.

*EU Cooperation with Syria is currently suspended due to the political situation in the country; however, since in principle Syria is eligible for cooperation under the ENPI, activities may be taken up again once the situation improves.

Under the EU-funded project “Provision of staff training and related consultancy services to the EU institutions, bodies and agencies – LOT 6 EU Governance Matters ”, the College of Europe Development Office is organising in 2013 many seminars focusing on Economics, from a general introduction to more specialised courses on the current economic situation.

For the second year of the project different activities are planned for different departments and services of the EU Institutions, Bodies and Agencies. Besides many seminars on Economics, other activities under the coordination of the College will cover different topics: from the EU’s role in the United Nations System to the state of play of the EU’s Energy policy, among others.

The project has started in January 2012 and will last 4 years. Under this contract, the College of Europe (together with its partners) is providing different types of training activities (face-to-face training, blended learning, e-learning), consultancy work relating to training and other professional development activities on EU governance matters. The participants are EU Officials from all the EU Institutions, Bodies and Agencies.

The Doctoral School is jointly organised by UNU-CRIS and the Universidad Andina, in collaboration with the Inter-American Development Bank (IDB), OBREAL, the Latin American Trade Network (LATN), GIGA, and the University of Barcelona. Its aim is to bring together a group of Ph.D. students and other young researchers for a series of lectures by leading senior academics in the field of Latin American, European and comparative regionalism, and to discuss their research projects in tutorial sessions.

Please click here to consult the call for applications.

Applications should be sent as soon as possible, but not later than 17 May 2013. 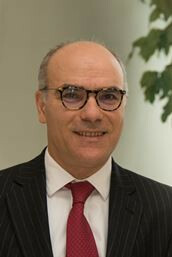