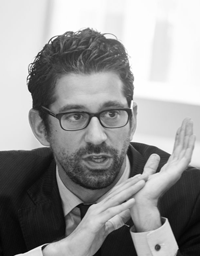 Sami Andoura is Professor and Chairholder of the European Energy Policy Chair at the College of Europe in Bruges.

Sami Andoura is Senior Research Fellow at Notre Europe - Jacques Delors Institute, where he heads research projects on“EU Energy policy” and on “EU External Actions”. He is the Deputy Editor-in-Chief of Studia Diplomatica - The Brussels Journal for International Relations, edited by EGMONT - Royal Institute for International Relations, where he is Senior Associate Fellow dealing with energy policy issues. He is also a Guest Lecturer in several universities across Europe, and contributes in several training programmes for diplomats and journalists.

His recent publications include a policy proposal for a“European Energy Community”, based on an initiative from Jacques Delors, as well as a number of academic articles, policy briefs and commentaries on the European Union, European Energy Policy and EU External Action.

Andoura previously held positions in Brussels with EGMONT Institute as Senior Research Fellow in charge of the European Affairs programme under the supervision of Rtd Amb. Philippe de Schoutheete, in the Brussels office of the British Law firm Lovells, and as Assistant Professor at Paris II Panthéon-Assas University.