High-level lecture by Professor Mary DALY on "Women and the Irish Revolution: Feminism and Nationalism"

On Wednesday 9 October 2019, the College of Europe at Natolin hosted a high-level lecture by Professor Mary DALY on Women and the Irish Revolution: Feminism and Nationalism.

This well attended lecture, jointly organized with the Embassy of Ireland in Poland, took place within the European Civilization Chair’s cycle on Breaking Empires, Making Nations?, which marks the centenaries of the First World War and its aftermath. The theme and Professor DALY were introduced by the Chairholder, Professor Richard BUTTERWICK-PAWLIKOWSKI. The Ambassador of Ireland to Poland, Her Excellency Ms Emer O’CONNELL, then spoke about Irish-Polish relations, the value of the work of the College of Europe and the importance of the contributions made by Irish diaspora women in various fields, as displayed in the accompanying exhibition, ‘Trailblazers’. Following the lecture, the lively discussion was moderated by the Natolin Student President, Ms Sarah MORGAN.

Mary E. DALY is Emeritus Professor in Irish history at University College Dublin. Since 2012 she has served as a member of the Expert Advisory Group that advises the Irish government on commemorating the major historical events of the period 1912-23. In 2015 she was elected President of the Royal Irish Academy (Ireland’s national academy for humanities and sciences), the first woman to hold this office. She currently serves as a member of the Irish Government’s Commission of Investigation into Mother and Baby Homes (1922-2000).

Among Professor DALY’s recent publications are: 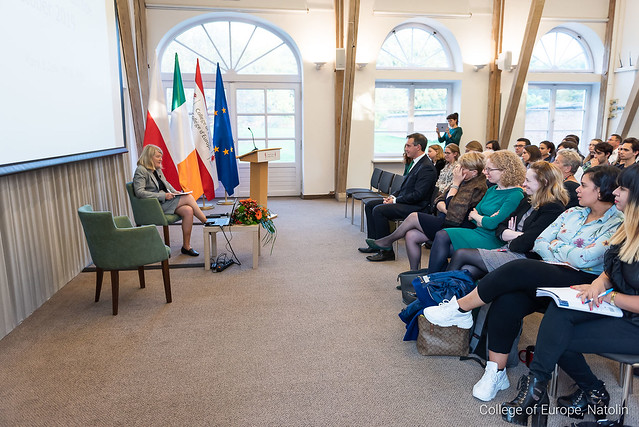