On Tuesday 25 June 2019, the College of Europe in Natolin held the Graduation Ceremony for the Manuel Marín Promotion 2018-2019.

The Graduation Ceremony began with a welcome speech by the Vice-Rector, Mrs Ewa OŚNIECKA-TAMECKA and by the Rector, Professor Dr Dr Jörg MONAR. During the ceremony the Natolin Choir of the Manuel Marín Promotion gave its last performance singing the European Anthem as well as a selection of songs prepared for this occasion. The Student Representatives Emma VERMUNICHT, Miro GUZZINI, Agnieszka WIDŁASZEWSKA and Bram VAN HECKE, also gave their farewell speeches and thanked their fellow students, faculty and administration for the memorable year at Natolin.

On the occasion of the ceremony, the following prizes were awarded to the best students of the Manuel Marín Promotion 2018-2019:

After the farewell address by the Vice-Rector, a traditional family picture was taken in front of the Natolin Palace. Then, the whole promotion, guests and staff members were invited to a reception at the Natolin Palace and Gardens. During the reception, the first edition of the "Natolin Peer Award" granted by Natolin students was awarded to Alexia FAFARA (FR).

We would like to congratulate all students of the Manuel Marín Promotion 2018-2019 on this achievement and wish them best of luck in their future endeavors! 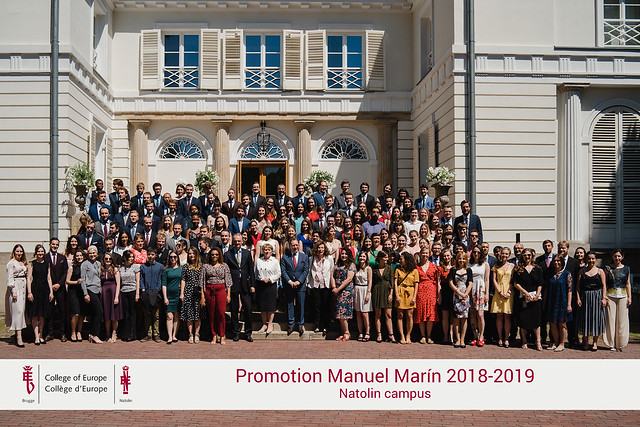