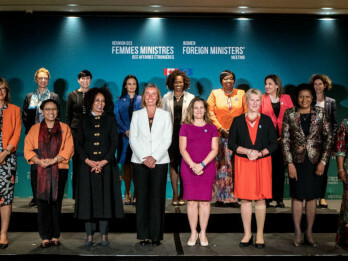 "This International Women’s Day, I want to share with you the photo of a very special moment for me.  When I was High Representative of the EU, we gathered women Foreign Ministers from all around the world, no continent excluded. The purpose was to discuss foreign policy issues, exchange experiences and projects, but also and mainly to show a different side of power. To make women in positions of responsibility —women in power—visible. To show that it happens already, so it is possible. To tell girls and young women like you, all around the world, that you can become Ministers, as we did. And you can do it keeping your smile, the colors of your clothing, your attitude to listen, include, build trust and show empathy, live emotions, find common ground. You can.

The theme of this year's International Women’s Day is "Women in leadership: Achieving an equal future in a COVID-19 world". Women are already in positions of responsibility, with 22 women Heads of State and Government across the world — and some of them leading exemplary responses to the pandemic. But we are still underrepresented, in all levels of institutions. Less than 25% of parliamentarians around the world are women, and those under 30 constitute only 1%! 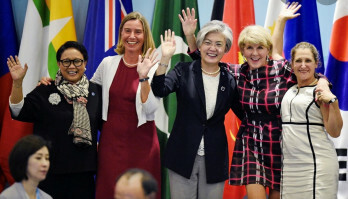 There is a long way to go. In institutions, at all levels. But also in business, media, academia. In all sectors of society, none excluded. And the gender pay gap is still a reality everywhere.

Your generation is the one that can make equality in leadership the norm.

Challenge stereotypes, with words and actions. Work hard, follow your dreams, never let anyone turn them down. Use the power you have. Promote equality every single day, with the means you have. In public, as much as in private life: remember that choosing a respectful partner, who shares responsibilities, and educating your children to equality, is a sometimes forgotten but fundamental part of the fight.  Don’t forget to also involve men in the fight: equality is not only a women’s issue, we need motivated, committed men to do their part and work hand in hand with us. Network.

If you manage to be the first woman in a certain position — in politics, finance, science, the military, wherever — make sure you keep the door open for other women to follow.

As the first woman Rector of the College of Europe, I will do my best to keep that door open.  I am at the same time proud of the great women we have among our students and in the team (Rector, Vice Rector, four out of five Directors of Studies, and gender equality among Heads of Service in the Administration and among Academic Assistants), but also aware of the need to do much more, to bring the College to full gender equality in all fields.

This is my challenge for the coming years, and I am grateful I can count on the support and the initiatives of such a great Student Association for Gender Equality."

This text has been written for the International Women’s Day campaign of the College of Europe’s Student Association for Gender Equality (SAGE).