The College of Europe in Natolin has the pleasure to share the second and last issue of Lingua Natolina for the academic year 2020/2021.

This year Lingua Natolina has brought together 64 participants and created content in 13 languages. The second issue coincided with the graduation of the Mário Soares Promotion and begins with a joint editorial by Rector Mrs Federica MOGHERINI and Vice-Rector Mrs Ewa OŚNIECKA-TAMECKA. It is then divided into the following sections.

You can find the full issue here and learn more about Lingua Natolina on our website.

Issue 2 features articles in 10 languages and the main theme is "Permanence and Transformation". 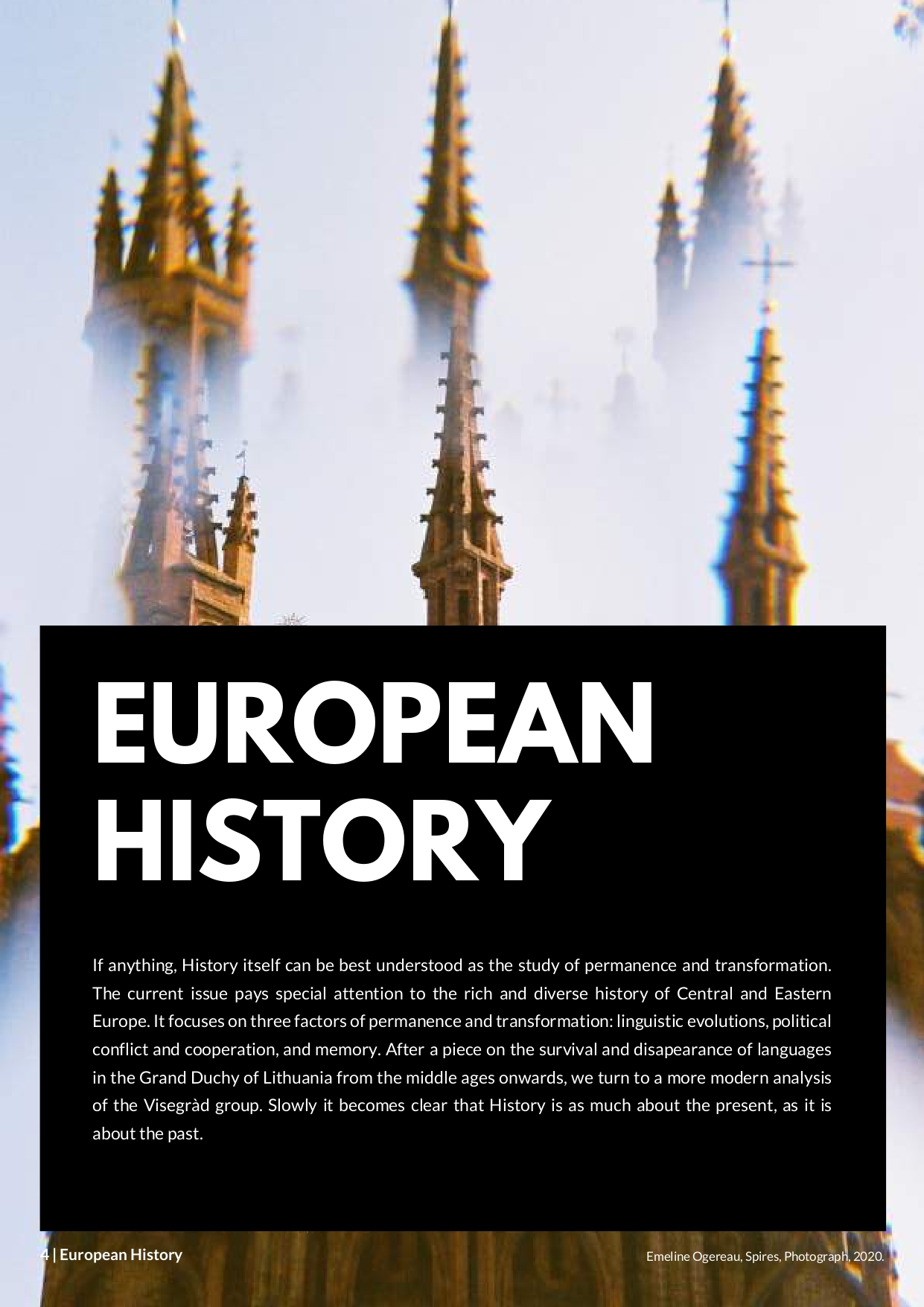 If anything, History itself can be best understood as the study of permanence and transformation. The current issue pays special attention to the rich and diverse history of Central and Eastern Europe. It focuses on three factors of permanence and transformation: linguistic evolutions, political conflict and cooperation, and memory. After a piece on the survival and disappearance of languages in the Grand Duchy of Lithuania from the Middle Ages onwards, this section turns to a modern analysis of the Visegràd group. Slowly it becomes clear that History is as much about the present, as it is about the past. 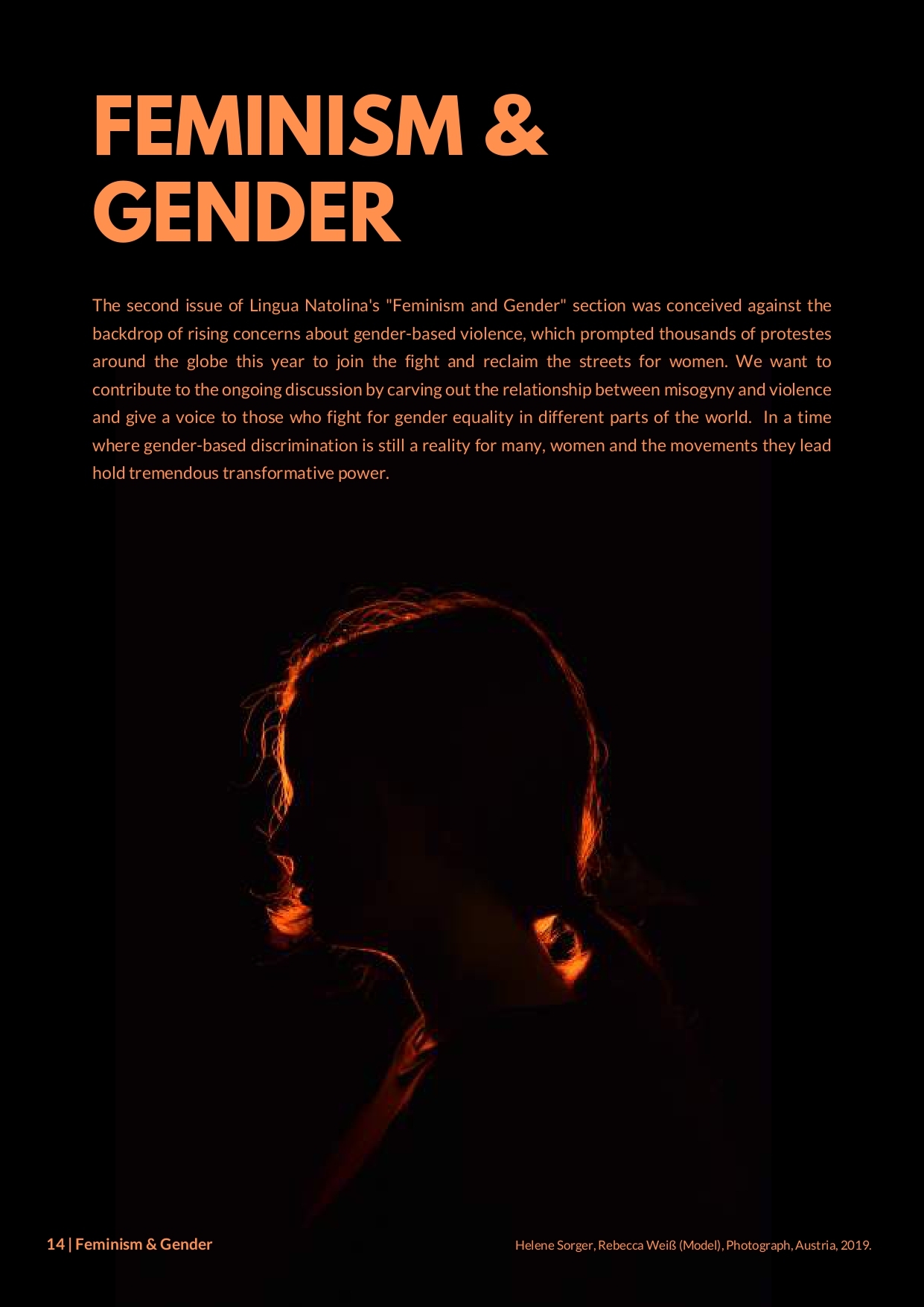 The second issue of Lingua Natolina's "Feminism and Gender" section was conceived against the backdrop of rising concerns about gender-based violence, which prompted thousands of protests around the globe this year to join the fight and reclaim the streets for women. We want to contribute to the ongoing discussion by carving out the relationship between misogyny and violence and give a voice to those who fight for gender equality in different parts of the world. In a time where gender-based discrimination is still a reality for many, women and the movements they lead hold tremendous transformative power. 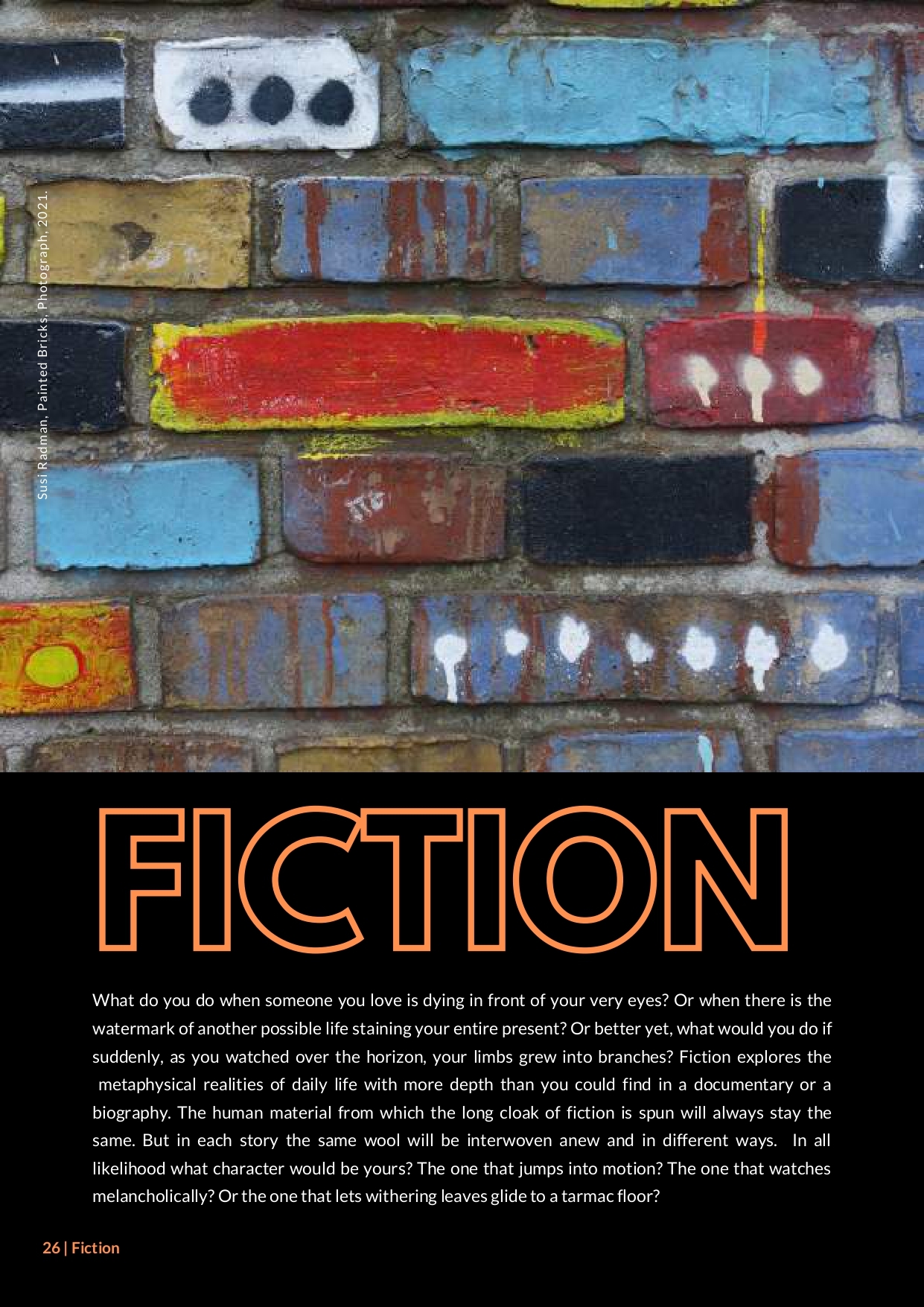 What do you do when someone you love is dying in front of your very eyes? Or when there is the watermark of another possible life staining your entire present? Or better yet, what would you do if suddenly, as you watched over the horizon, your limbs grew into branches? Fiction explores the metaphysical realities of daily life with more depth than you could find in a documentary or a biography. The human material from which the long cloak of fiction is spun will always stay the same. But in each story, the same wool will be interwoven anew and in different ways. In all likelihood what character would be yours? The one that jumps into motion? The one that watches melancholically? Or the one that lets withering leaves glide to a tarmac floor? 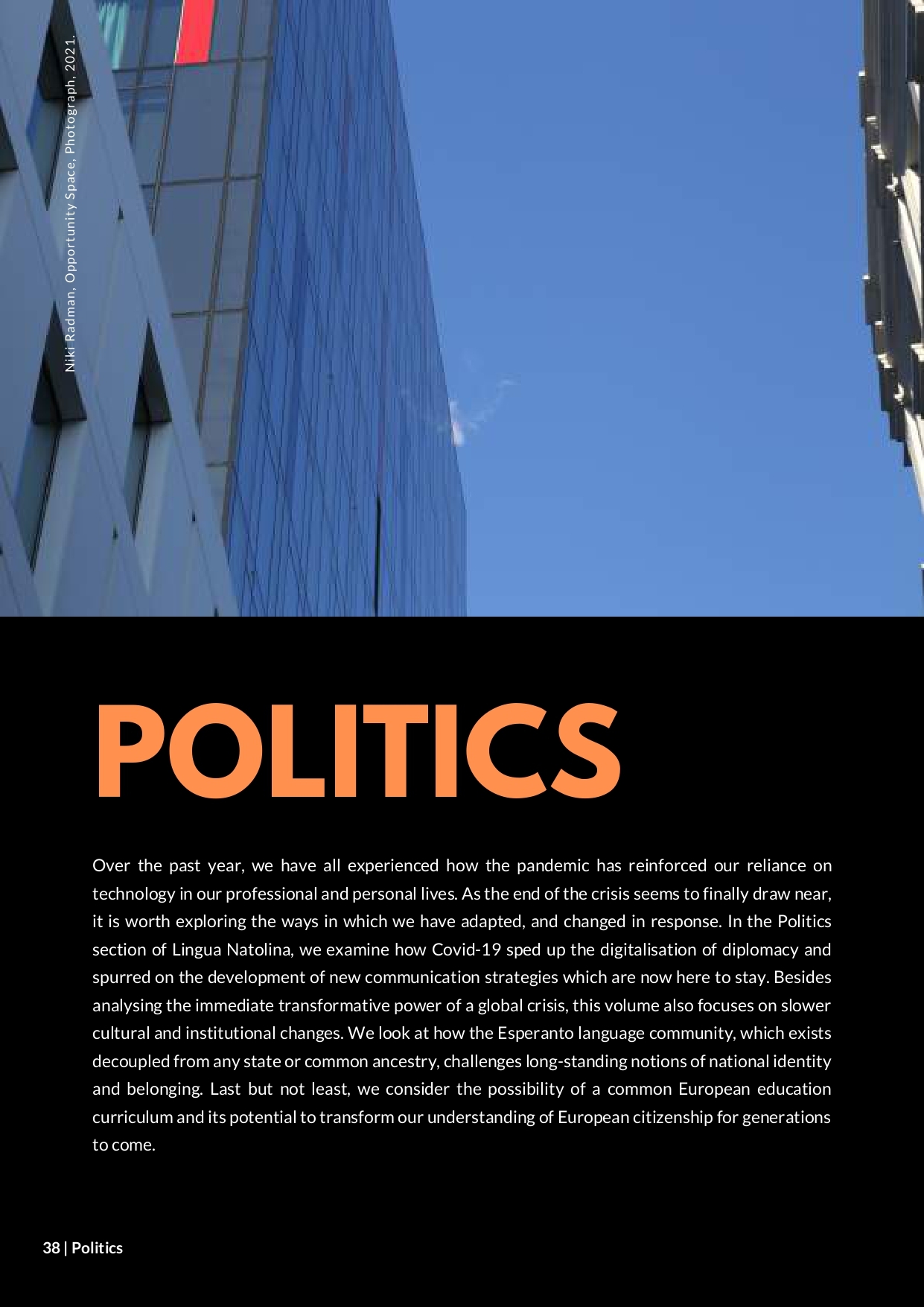 Over the past year, we have all experienced how the pandemic has reinforced our reliance on technology in our professional and personal lives. As the end of the crisis seems to finally draw near, it is worth exploring the ways in which we have adapted, and changed in response to the pandemic.

In the Politics section of Lingua Natolina, we examine how COVID-19 sped up the digitalisation of diplomacy and spurred on the development of new communication strategies which are now here to stay. Besides analysing the immediate transformative power of a global crisis, this volume also focuses on slower cultural and institutional changes. We look at how the Esperanto language community, which exists decoupled from any state or common ancestry, challenges long-standing notions of national identity and belonging. Last but not least, we consider the possibility of a common European education curriculum and its potential to transform our understanding of European citizenship for generations to come. 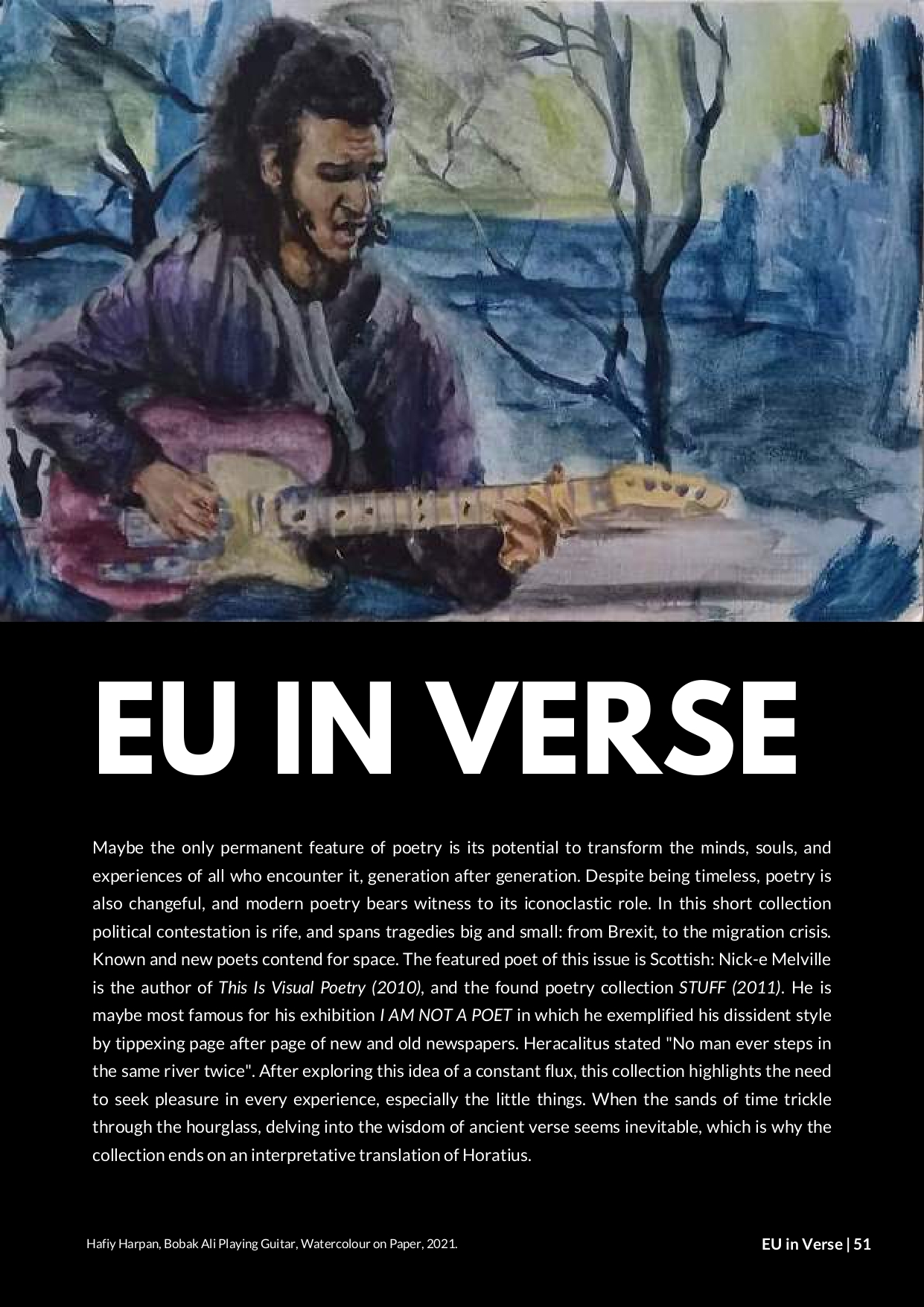 Maybe the only permanent feature of poetry is its potential to transform the minds, souls, and experiences of all who encounter it, generation after generation. Despite being timeless, poetry is also changeful, and modern poetry bears witness to its iconoclastic role. In this short collection, political contestation is rife and spans tragedies big and small: from Brexit to the migration crisis known and new poets contend for space.

The featured poet of this issue is Scottish: Mr Nick-e MELVILLE, author of This Is Visual Poetry (2010), and the found poetry collection STUFF (2011). He is maybe most famous for his exhibition I AM NOT A POET in which he exemplified his dissident style by tippexing page after page of new and old newspapers.

Heracalitus stated "No man ever steps in the same river twice". After exploring this idea of constant flux, this collection highlights the need to seek pleasure in every experience, especially the little things. When the sands of time trickle through the hourglass, delving into the wisdom of ancient verse seems inevitable, which is why the collection ends on an interpretative translation of Horatius. 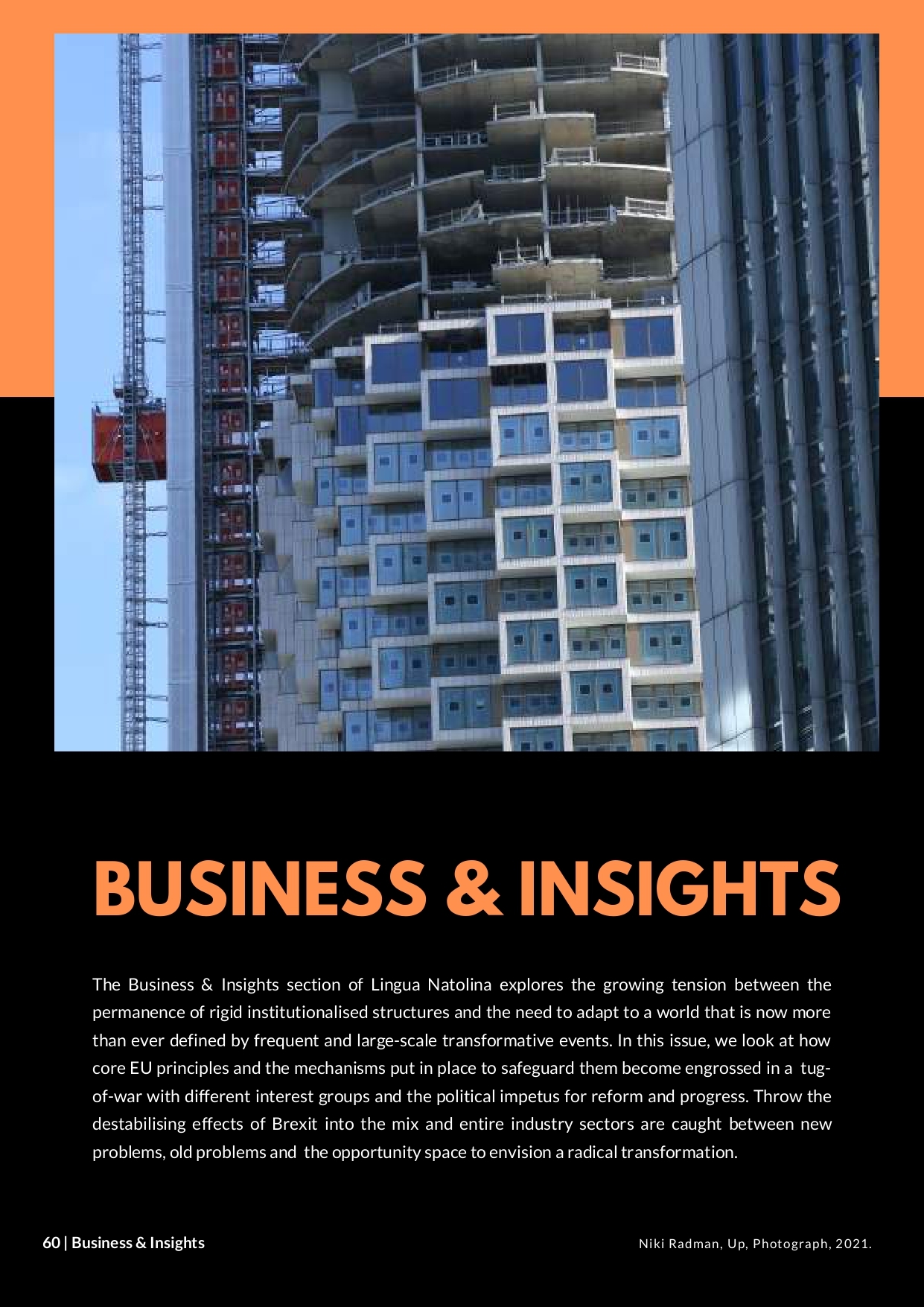 The Business & Insights section of Lingua Natolina explores the growing tension between the permanence of rigid institutionalised structures and the need to adapt to a world that is now more than ever defined by frequent and large-scale transformative events. In this issue, we look at how core EU principles and the mechanisms put in place to safeguard them become engrossed in a tug-of-war with different interest groups and the political impetus for reform and progress. Throw the destabilising effects of Brexit into the mix and entire industry sectors are caught between new problems, old problems and the opportunity space to envision a radical transformation.