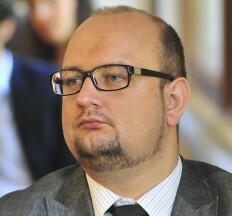 Dr Andriy TYUSHKA, Research Fellow in the European Neighbourhood Policy Chair at the Natolin campus of the College of Europe, just published with East/West: Journal of Ukrainian Studies a review essay on the Aggression against Ukraine.

Drawing on the extensive review of Thomas D. GRANT's same-titled book, this timely writing on international law and order in the context of Russian aggression in Ukraine appears in the press right at the time when – in the follow-up to the preliminary findings revealed in November 2016 by the International Criminal Court in its proceedings of the annexation of Crimea case – the International Court of Justice in The Hague opens on 6 March 2017 its own hearings in the Ukraine vs Russian Federation case (sponsoring terrorism in Eastern Ukraine).

The essay elaborates on a wide array of topics covered in both the GRANT’s book and two ongoing resonant trials (territory, responsibility, self-determination, secession), as well as some issues that fall beyond the book's scope – like the problem of disentangling aggression in the age of lawfare and the responsibility to respond (R2R) doctrine that emerges in the face of profound challenges to the current international legal order.

Written long before Russia officially acknowledged, on 22 February 2017, the fact of the established and operating General Staff's Special Information Warfare Force (Voiska informatsionnykh operatsii, VOI), the article disentangled Russia's weaponization of narratives and information in pursuit of (geo)political goals in post-truth times. The article disentangles Russia's multi-layered strategic uses of fake news, disinformation, false and fictitious narratives, as well as the growing militarization of Russian propaganda across European and Atlantic democracies, within the analytical framework of political warfare and strategic narrative offensive.

It analyses the pitfalls of the Russian delude and conquer operations of sorts in the context of both past (UK and US elections, Dutch referendum on the EU-Ukraine Association Agreement), current (information and cyber-attacks across European countries, including Germany, Poland and the Baltic states), and forthcoming (elections in Germany, Netherland and France) domestic political developments in European and Atlantic democracies, as well as the policies of international organizations like NATO and the European Union.