The EU-China Research Centre and the Baillet Latour Chair of European Union-China Relations organised a roundtable on EU-US-China relations on Friday, 10 February 2017 at the China Library, Verversdijk. 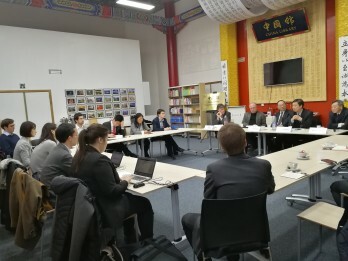 2016 was a very eventful year in global politics, culminating with the election of maverick Republican candidate Donald TRUMP to the single most powerful seat in global affairs – that of President of the United States. While TRUMP’s actual sway in US foreign policy is yet to be determined, many experts and policymakers have already pointed at the rising uncertainty stemming from the new President’s anti-establishment orientation.

As far as US-China relations are concerned, TRUMP has already ruffled some feathers with his ‘unorthodox’ openness to Taiwan and – indirectly – with his nominee for Secretary of State Rex TILLERSON’s very confrontational remarks on China’s policies in the South China Sea. Some commentators have already been arguing that TRUMP will, at least to a certain degree, undo OBAMA’s pivot towards Asia in general and China in particular. Whether that is actually going to be the case remains to be seen, but the very possibility of greater US isolationism is bound to elicit a response from other key global players, including the EU.

While ties between Brussels (and the Member States) and Beijing are getting stronger, the US remains the most important partner for both the EU and China, and all changes in its policy vectors do and will have repercussions on both the bilateral and the trilateral relations.